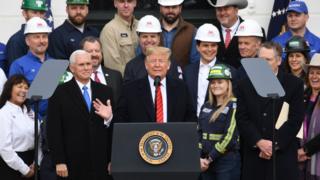 Donald Trump speaks ahead of the USMCA signing

US President Donald Trump has formally signed a new trade pact with Mexico and Canada, bringing his campaign promise to replace the three countries’ existing deal closer to fruition.

Mr Trump has described Nafta as America’s “worst” deal and blamed it for a decline in manufacturing jobs.

Canada has yet to ratify the pact but is expected to do so within weeks.

In the US, Democrats, who control the House of Representatives, insisted on changes – including stronger labour rules – before voting in support of the measure. Those revisions were approved late last year.

Many of the original Nafta provisions will continue under the new accord, which governs more than $1tr in annual trade between the three countries. It also sets new terms for digital trade and increases US access to Canada’s dairy market.

The most eye-catching changes concern new rules for car companies, which are aimed at boosting production in the US.

The new deal requires a higher percentage of vehicles to be made in North America to qualify for tariff-free treatment. It also requires that a certain percentage of each vehicle be made by workers making at least $16 an hour.