Trump speaks to ‘his people’ on Wall Street 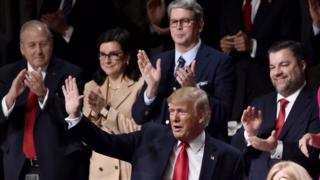 By the reckoning of most economists, Donald Trump is engaged in a risky game, as he courts trade fights around the world, undermines the US central bank and runs up the national debt.

None of that seems to matter too much to Wall Street.

The US president got a warm welcome in New York on Tuesday, where he spoke before a crowd of 1,350 hosted by the Economic Club of New York.

Assorted whistles filled the room when his name was announced. Big applause followed his claim to have delivered and exceeded his campaign promises.

It soon became clear that he needn’t have worried.

“I think he felt comfortable with the crowd. It’s his people,” said one member of the audience, who works in New York property.

Tuesday’s speech was, in the words of that man, “classic Trump” – an hour-long monologue that covered familiar topics, including the rise in the US stock market and US trade policy.

Audience members – who were primarily white and male – afterward deemed the talk “articulate” and “very inspirational”.

“I truly believe he’s working for the American people, not himself,” one man said.

Many people were listening for clues on US-China trade talks

Those listening in hope of gleaning some intelligence on US-China trade talks were bound to be disappointed. A deal is close, the president said, as he has before.

But those there for the selfie, cheesecake and general spectacle probably came away satisfied.

“Kings and queens and prime ministers and presidents and dictators – I meet ’em all,” Mr Trump said, drawing a gasp of disbelieving laughter.

The audience listened with equanimity as Mr Trump spoke about reviving the manufacturing sector and reversing America’s losing record before the World Trade Organization (WTO).

In fact, while the US manufacturing sector has added jobs, their numbers remain lower than they were before the financial crisis. And the US has a long-standing record of winning the vast majority of cases it brings before the WTO.

Those jibes got big applause.

Mr Trump also seemed confident about the upcoming election. After all, Democrats such as Elizabeth Warren want tougher climate policies and higher taxes on billionaires.

“The truth is, you have no choice,” he told the crowd of dark suits. “Because the people we’re running against are crazy.”