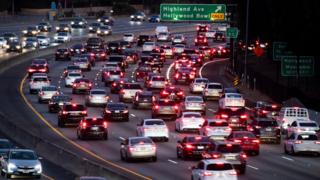 The White House has stripped California of its right to set its own auto emissions standards and banned other states from setting similar rules.

The move revokes an Obama-era waiver that allowed the state to set its own standards for greenhouse gas emissions for cars.

President Trump says the move will cut car prices and the impact on emissions will be minimal.

But it is likely to spark a legal battle related to states’ rights.

“The Trump administration is revoking California’s Federal Waiver on emissions in order to produce far less expensive cars for the consumer,” Donald Trump tweeted on Wednesday.

“Automakers should seize this opportunity because without this alternative to California, you will be out of business.”

….far safer and much less expensive. Many more cars will be produced under the new and uniform standard, meaning significantly more JOBS, JOBS, JOBS! Automakers should seize this opportunity because without this alternative to California, you will be out of business.

California has already taken steps to block the administration’s efforts.

“We will fight this latest attempt and defend our clean car standards,” said Governor Gavin Newsom in a statement on Tuesday.

This is the latest in a series of standoffs between Mr Trump and the country’s most populous state.