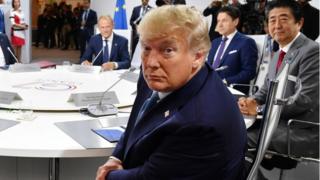 Reports that the US president regretted escalating the trade war with China have been misinterpreted, according to the White House.

Donald Trump had earlier responded “Sure, why not?” when asked whether he had second thoughts about the move.

The White House said Mr Trump’s answer was “misinterpreted… He regrets not raising the tariffs higher.”

The move was the latest salvo in a bitter tit-for-tat war which has seen the US impose tariffs on more than $250bn (£204bn) of Chinese goods.

In reaction, China has put tariffs on almost all US goods imported into the country.

The seeds of the trade war were planted during Mr Trump’s 2016 presidential campaign, when he accused Beijing of “raping” US workers.

Mr Trump’s admission to having second thoughts over China appeared to be a rare conciliatory statement from a US president who has until now been unwavering over his plans to protect US jobs and redress what he has said are unfair trade deals previously agreed with China.

The US president was speaking at the G7 summit in France, in response to a question from a reporter.

White House spokeswoman Stephanie Grisham said: “His answer has been greatly misinterpreted. President Trump responded in the affirmative – because he regrets not raising the tariffs higher.”

On Friday, the president had said he planned to order US firms working in China to move their operations back to the US. It is unclear how Mr Trump could force firms to comply.

Asked on Sunday if he would declare a national emergency over the issue, the US president said: “I have no plan right now. Actually, we’re getting along very well with China right now. We’re talking. I think they want to make a deal much more than I do.”

Separately at the G7, the US and Japan said they had agreed the bulk of a trade deal, covering agriculture, industrial tariffs and digital trade. Car tariffs would remain unchanged, in the agreement which is due to be signed next month.

Mr Trump said Japan had agreed to buy corn that US farmers had been left with due to the tariffs imposed by China.