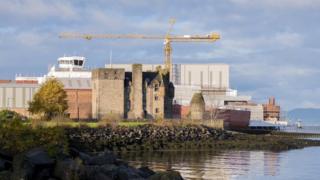 The former owner of the nationalised Ferguson shipyard has said he is ready to resume involvement in the yard.

Engineering tycoon Jim McColl was forced to hand the business to administrators five weeks ago.

Since then the Scottish government has operated the yard under a management agreement with administrators.

Mr McColl said he was happy to talk to ministers about some sort of “joint arrangement” for the yard, which currently owes taxpayers about £50m.

Ministers are hoping a private buyer will take over the business.

The Inverclyde shipyard ran into trouble after failing to complete a £97m order to build two ferries for Scottish government owned CalMac.

Jim McColl has blamed repeated design changes and other bureaucracy for the spiralling costs of the unfinished order.

He said that since the yard had been taken over by the Scottish government, he had been part of a joint venture – along with a major overseas shipbuilder – considering a bid to take the yard out of administration.

However, that plan was abandoned last week due to a lack of time to prepare the bid. It is understood there are two other private bidders still interested.

A statement about the bids has been expected from Deloitte, the administrator, for some days.

Mr McColl said he would be “happy to talk to the Scottish government about some sort of joint arrangement”.

He said this would involve the Scottish government setting up a separate company to complete the two CalMac ferries.

Mr McColl, who controls the investment company Clyde Blowers, said this would allow the firm to focus on other contracts that could otherwise be lost to the yard.

The contract to build two ferries for CalMac remains unfinished

The billionaire suggested these could include a project with several industrial partners and St Andrews University to develop hydrogen-powered ferries.

Ferguson shipyard was part of the winning partnership in bidding to win the £1.25bn contract to build five Type 31 frigates for the Royal Navy.

Babcock was lead partner and named as the sole preferred bidder.

Mr McColl said he wanted to ensure the Inverclyde yard was included in the military order, securing up to 10 years’ worth of work to build the bow sections.

Illegal to bail out

Such a business model – splitting the CalMac ferries from other marine engineering work – was proposed by Mr McColl and Clyde Blowers before its subsidiary was taken over by administrators.

At the time, the Scottish government said it would be illegal to bail it out, or to meet the rapidly increasing cost of finishing the two ferries, on what had been a fixed price contract.

However, Mr McColl said that would not apply to a company buying assets out of administration, and Finance Secretary Derek Mackay has said he would welcome private sector investment in the yard.

Mr Mackay has set out his determination to ensure the ferries – which are due to operate in Arran and Skye are completed – and says he will outline the timetable and cost of doing so by the end of next month.

Mr McColl also denied reports earlier this week, based on Deloitte’s assessment of Ferguson’s finance, that Clyde Blowers had left some of the yard’s 300 workers unpaid.

He said staff pay was brought forward when it was clear the company was heading into administration, and that holiday pay and pensions would be honoured through the administration process.

In response to opposition MSP calls for an inquiry into the funding of Ferguson shipyard and the CalMac ferries, Mr McColl said he was eager to contribute.