Uber: Three views on the loss of its London licence 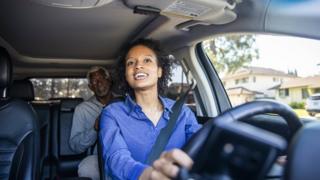 On Monday, London’s transport authority told taxi hailing firm Uber it would not extend its licence to operate in the capital.

The firm said it will appeal against Transport for London’s (TfL) decision, the latest twist in two years of friction between Uber and the local government.

In 2017, Uber also lost its licence, until it won an appeal. It then received a two month licence in September, which lapsed on Sunday. Users will still be able to use the service while Uber appeals.

Uber branded the move as “extraordinary and wrong”, while London Mayor Sadiq Khan said there had been 14,000 fraudulent trips in London in late 2018 and early 2019, and that “safety is the paramount concern”.

The BBC spoke to three London-based customers and drivers about their experiences with the firm.

Uber “was especially important to me when I broke my leg and relied on it to transport me everywhere. Without Uber I would not have gone out at all and would have been miserable,” says Rachel Wilkinson, who works in business research.

She says she feels for those with mobility problems who might be more permanently reliant on hiring cars, especially when the alternative is pricier private hires and black cabs. “Uber genuinely was a lifeline,” she said.

Ms Wilkinson says she feels more pressure should be put on TfL to modernise black cabs with the same information available to Uber passengers, and to make them cheaper.

“I do want to make sure I’m driving with someone secure and safe,” she says, adding that Uber should monitor and assess drivers.

The service has allowed her to ditch her car. “Instead of wasting money on a car I only used at weekends, paying crazy parking and congestion charges and clogging up the roads, Uber allows me to use a car when I need to and not worry about it the rest of the time.

“I’d have thought that given the insane congestion in London, this would a positive thing for the local government too.”

Kay, who didn’t want to give her surname, said her experience with Uber wasn’t good. She had used the app for about five years until she had an experience that made her uncomfortable enough to abandon her ride.

“I am sad for the genuine drivers who will lose their jobs,” she said. “But Uber itself? No.”

She says that after what turned into a disagreement about the route, her driver ignored one of her directions, driving quickly past her turn, and she chose to end the ride.

When she complained, Uber offered her £5. She gave the driver a one star review on the app – the worst possible – after which her driver complained about her. The company threatened to suspend her account.

There were no apologies for having been made to feel so uncomfortable, she said. “I was forced, late at night, to abandon the ride… Don’t worry about banning my account [Uber]. I won’t be using you again anyway. I don’t think they take complaints seriously enough,” she said.

An Uber spokeswoman said: “We take all reports of this nature very seriously and investigate thoroughly. We typically prevent drivers from using the app during investigations and if the allegations prove true, an individual would likely face permanent deactivation. We work closely with the police to assist with any investigation.”

“I knew it was going to happen,” says Muhammad Ali, who has been driving for Uber for nine months after a 19-year private hire career. He says he feels that TfL care more about drivers of London’s black cabs.

He says he was shocked about the news of so many unlicensed trips, but believes Uber is a good company to work for. “I know how this business works,” he says. “I think they are driver-friendly.”

He says not having to handle cash is a big boon for him as a driver, together with all the other things the Uber software takes care of.

This includes the jobs that a human operator would normally be in charge of, such as allocating good routes.

“This is the only company I work for. It is my full-time job. If Uber loses its licence I’ll be out of a job,” he says. That said, he certainly feels that Uber “should get their house in order sort out all the issues TfL have pointed out”.