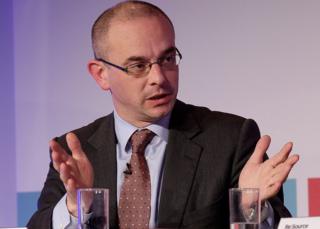 Paul Donovan speaking at an event in 2012

An economist at Swiss investment bank UBS will return work after being suspended for making controversial comments about swine fever in China.

Paul Donovan of UBS Global Wealth Management was suspended in June after he said that an outbreak of the disease only “matters if you are a Chinese pig [or] if you like eating pork in China”.

It prompted a backlash with one Chinese firm suspending all business with UBS.

UBS confirmed Mr Donovan would return to work on Wednesday.

The remarks, made an interview for a podcast interview, were seized upon by Chinese media because the word “pig” in China is used to connote stupidity and laziness.

Mr Donovan who has worked for UBS since 1992, had been referring to the impact of swine fever on inflation and consumer prices of pork.

Mr Donovan later apologised on TV, saying: “I apologise for anyone who took any offence from my remarks, which were clearly not intended to offend.

“I got it wrong. I made a mistake, and I unwittingly used hugely culturally insensitive language.”

But it did not sate critics, with China’s state-run Global Times newspaper claiming that Mr Donovan’s apology was “not sincere” and reflected “the deep arrogance of Western elites to Chinese culture”.

It is a delicate time for Western companies operating in China, as Beijing faces an escalating trade war with the US and political unrest in Hong Kong.

In August, the boss of British-backed Cathay Pacific – Hong Kong’s biggest airline – had to step down over his muddled response to pro-democracy protests in the territory.

Last week, the Financial Times reported that a lawyer for investment bank BNP Paribas in Hong Kong had quit after he posted comments on Facebook about the protests.

Jason Ng criticised “pro-Beijing counter-protesters” caught up in the recent unrest, saying that “very soon, flag-waving communist party loyalists will be forming human chains across the city and launching their own ‘China Way’ campaign”.