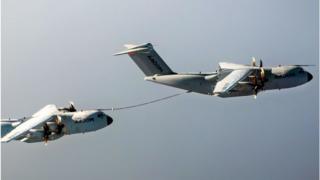 The government has approved a US private equity firm’s takeover of UK defence and aerospace firm Cobham.

Advent International made a £4bn offer to buy Cobham in July and shareholders approved the deal last month.

But Cobham’s founding family raised concerns about the security implications of the deal, prompting a government consultation.

Business secretary Andrea Leadsom has now said she is satisfied any risks have been mitigated.

Cobham, which employs 10,000 people, is known for pioneering technology enabling the mid-air refuelling of planes. The firm, based in Wimborne, Dorset, also makes electronic warfare systems and communications for military vehicles.

Mrs Leadsom said the decision had been “meticulously thought over” and came after she took advice from the defence secretary and the deputy national security adviser.

She added: “Having considered the consultation responses and further advice from the defence secretary, I am satisfied that the undertakings mitigate the national security risks identified to an acceptable level and have therefore accepted them and cleared the merger to proceed.”

The business secretary said sensitive government information would continued to be protected under the new owner and existing contracts would be honoured.

The company is also obliged to give the government prior notice of any plans to sell the whole, or elements of, Cobham’s business.