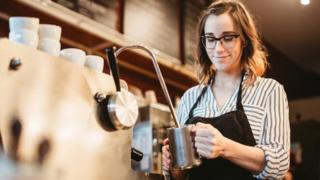 The UK’s economy may have tipped into recession following a downturn in the dominant service sector, according to closely-watched figures.

The IHS Markit/CPS purchasing managers’ index for services fell to a six-month low of 49.5 in September. The 50 level divides growth from expansion.

It suggests the economy shrank 0.1% in the three months to September, after a 0.2% fall in the previous quarter.

Combined with even weaker manufacturing and construction purchasing managers’ indexes (PMI) earlier this week, September’s all-sector PMI sank to 48.8 from 49.7. This was its lowest since the month after the referendum decision to leave the EU in June 2016, and before that 2009.

“Coming on the heels of a decline in the second quarter, (this) would mean the UK is facing a heightened risk of recession,” said IHS Markit economist Chris Williamson. A recession is normally defined as when an economy contracts over two consecutive quarters.

“September’s decline is all the more ominous, being the result of an insidious weakening of demand over the past year rather than a sudden shock,” Mr Williamson added. He highlighted Brexit uncertainty and worries about trade tensions between the US, China and Europe.

Although the PMI data is closely followed it is not considered foolproof. Immediately after the Brexit referendum, the data indicated a sharper downturn than was actually the case.

Last month, latest figures from the Office for National Statistics (ONS) pointed to the UK economy growing faster than expected in July, easing fears that it could fall into recession.

Growth was flat over the three months to July, but this was an improvement on the 0.2% contraction seen in the April-to-June quarter. ONS growth data for August is due for publication on 10 October.

This survey has sounded the recession alarm bells – pointing to a second quarter of shrinking GDP. Not only does it imply one of the biggest slumps in activity in the dominant service sector since the financial crisis but, taken with its counterparts for manufacturing and construction, signals output falling across the economy.

Should we be worried? These surveys are the first monthly insight into the health of major parts of our economy. But in these tumultuous times, they may be more of a mood check rather than a whole-body MOT.

The authors refer to Brexit-related anxiety: sentiment, rather than activity, may be clouding or obscuring the picture. It wouldn’t be the first time. Earlier this year (because of course we’ve been here before) these surveys failed to fully reflect the flurry in Brexit preparations. Nor do they cover retail or the public sector – two areas that have underpinned the growth we have seen. The surveys can and do deviate from official growth numbers.

But it’d be dangerous to ignore the warnings. Sentiment can dictate all sorts of business plans – from investment to hiring. The impact of those can last longer than one quarter’s GDP.

Economists said Thursday’s PMI figures were a warning. Ruth Gregory, senior UK economist at Capital Economics, said they reignited concerns the economy is in recession as it “suggests that growth in the biggest part of the economy has fizzled out”.

However, while Dean Turner, UK economist for UBS Global Wealth Management, said the figures were “gloomy”, he added that the PMIs “have had a tendency to overreact relative to reality. It is too early to conclude that the UK is heading for a recession on these numbers alone”.

And Samuel Tombs, chief UK economist at Pantheon Macroeconomics, went further. “The survey’s poor track record recently means its recession signal should not be believed,” he said. “Markit’s services survey has been far too downbeat over the last year.”