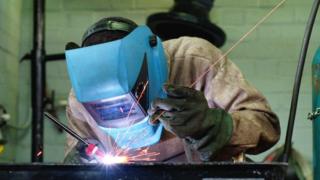 GDP data is compiled from data provided by thousands businesses

GDP in the October to December period was the same as the previous quarter, the Office for National Statistics’ (ONS) first estimate suggests.

This was a fall from the 0.5% growth seen in the previous three months.

The ONS said growth in the services and construction sectors was offset by a “poor showing from manufacturing, particularly the motor industry”.

In December alone, however, the economy grew by 0.3%, reversing the decline seen previously in November.