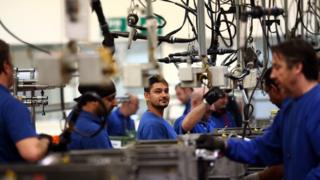 UK manufacturing and services saw their best month for more than a year in January, a survey has suggested.

The UK composite purchasing managers’ index (PMI), which includes the two sectors. rose to a 16-month high of 52.4, up from 49.3 in December.

IHS Markit, which compiled the survey, said demand was growing in the wake of the general election in December.

The figures are the last economic data to be released before Bank of England policymakers meet next week.

Analysts said they made an interest rate cut less likely.

The IHS Markit/CIPS PMI for services showed the sector returning to growth for the first time since August 2019, rising to 52.9 from the previous month’s 50.0. Any score above 50 indicates expansion.

Manufacturing continued to contract, but at a slower pace. Its PMI reading rose to 49.8 from December’s 47.5.

“The survey data indicate an encouraging start to 2020 for the UK economy. Output grew at the fastest rate for 16 months amid rising demand for both manufacturing and services, suggesting business is rebounding after declines seen late last year,” said IHS Markit’s chief economist Chris Williamson.

“Intensifying political and economic uncertainty ahead of the general election has started to ease, encouraging more spending and helping push business expectations of future growth to its highest since mid-2015.”