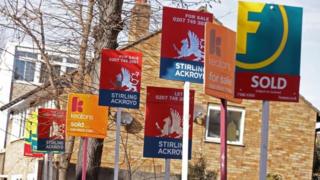 UK house prices rose at their fastest annual rate for 14 months, according to the Nationwide, with an increase of 1.9% in January.

Commentators suggest there has been some release of pent-up demand following the clear general election result.

However, the Nationwide, which bases its figures on its own mortgage data, said it expected property prices to be flat in 2020.

House prices were up by 0.5% in January compared with the previous month, the building society said.

“Much will continue to depend on how quickly uncertainty about the UK’s future trading relationships lifts, as well as the outlook for global growth. Overall, we expect the economy to continue to expand at a modest pace in 2020, with house prices remaining broadly flat over the next 12 months.”

Analysts said that the Brexit process would again be key to the movement of house prices.

“January is usually a busy time for estate agents as would-be buyers begin their search in earnest. But this year their numbers have been swelled by thousands of people who sat on their hands as Brexit uncertainty swirled,” said Jonathan Hopper, managing director of Garrington Property Finders.

“Sellers too are returning to the fold, meaning the market is seeing a simultaneous uplift in both demand and supply. Only when the dust settles will we know for certain how that double stimulus affects prices.”

A separate survey by property portal Zoopla showed that cities outside the south of England saw the biggest rises in prices in 2019, partly as a result of their relative affordability.

Annual house price growth stood at 6.1% in Edinburgh in December 2019 – the highest among UK cities, with Nottingham seeing the second biggest increase at 5.2%.