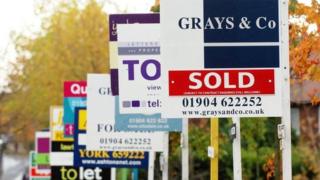 Annual growth in UK house prices has been below 1% each month for the last year in a relatively stagnant market, a major mortgage lender has said.

Prices rose 0.8% in the year to late November, the Nationwide said – a slight pick-up on the previous month.

It said the housing market was being affected by wider economic uncertainty over weak global growth and Brexit.

The figures, which are based on the Nationwide’s mortgage data, suggest that prices rose by 0.5% in November compared with the previous month.

Samuel Tombs, chief UK economist at Pantheon Macroeconomics, said: “November’s month-to-month gain in Nationwide’s index was the biggest since July 2018, indicating that support from the recent fall in mortgage rates is starting to kick in.”

Jonathan Samuels, chief executive of property lender Octane Capital, said: “The property market is hardly all guns-blazing but neither has it given up the ghost.

“Ultra-low borrowing rates and a deep-seated boredom around Brexit mean transaction levels continue to tick over. People have said enough is enough and are getting on with their lives, something that really shone through in November.”

The Nationwide also said that election periods tended not to have a direct impact on the housing market. Broader economic conditions were more dominant over the decisions of buyer or sellers.

“Rightly or wrongly, for most home buyers, elections are not foremost in their minds while buying or selling their home,” said Robert Gardner, Nationwide’s chief economist.