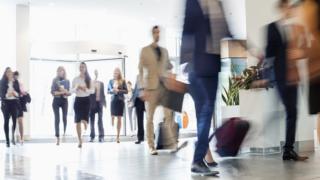 The UK jobs market is showing signs of slowing, but pay growth is still ahead of inflation, official figures show.

The unemployment rate unexpectedly rose to 3.9% in the June-to-August period from 3.8%, which had been the lowest rate since January 1975.

The Office for National Statistics (ONS) said unemployment increased by 22,000 to 1.31 million.

Earnings excluding bonuses grew at an annual pace of 3.8%, the same as the previous reading.

Click here to take part in a short study about this article run by the University of Cambridge.

Figures released by the ONS indicated that the number of people in employment fell by 56,000 to 32.69 million during the three-month period.

“Among the under-25s, the employment rate has actually started to fall on the year.”

The ONS said vacancies fell again to 813,000, reaching their lowest level since the three months to November 2017.

“However, it could also be evidence that the uncertainty around Brexit is starting to impact firms’ hiring decisions. The survey evidence is consistent with a further softening in employment and wage growth going forward too.”