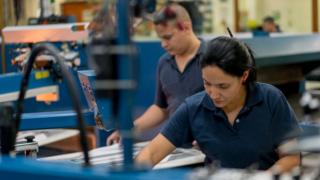 Productivity in the UK fell at its fastest annual pace in five years in the April-to-June quarter, according to the Office for National Statistics.

The figure – measured by output per hour – fell by 0.5%, after two previous quarters of zero growth.

Both services and manufacturing saw a fall from April to June, the ONS said.

It added: “This sustained period of declining labour productivity represents a continuation of the UK’s ‘productivity puzzle’.”

The ONS added that productivity since the economic downturn in 2008 was “growing more slowly than during the long period prior to downturn”.

Tej Parikh, chief economist at the Institute of Directors, said: “These figures hammer home the impact uncertainty is having on the business environment.

“Unsure of what’s around the corner, businesses’ investment in the new equipment and technology that drives up their performance has been stifled. Many companies are also trimming their investment pipelines for the year ahead to build up a cash cushion in anticipation of challenging economic conditions ahead.”

Jon Boys, from the Chartered Institute of Personnel and Development, said: “Businesses may have more immediate concerns than raising productivity, but it’s the only way to increase pay packets in the long term.

“We mustn’t be fooled by recent strong earnings growth figures, which have been driven by a tight labour market and not an increase in employers’ ability to pay.”

Howard Archer, chief economic adviser to the EY Item Club, commented: “Heightened concerns over Brexit – especially serious concerns among many companies of the UK leaving the EU without a deal – has clearly caused companies to limit their investment with damaging implications for productivity.

“If a Brexit deal is agreed and enacted by 31 October, this will hopefully dilute business uncertainty and provide some boost to business investment, which would be good news for productivity prospects.”