November 9, 2019 by Joshua Marshall No Comments 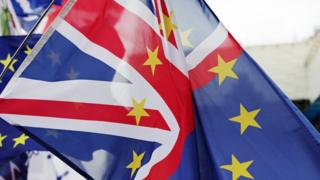 The UK’s credit rating could be downgraded, according to ratings agency Moody’s, which says Brexit has caused “paralysis in policy-making”.

It has changed the outlook on the UK’s current rating – which is a marker of how likely it is to pay back its debts – from “stable” to “negative”.

Moody’s also criticised the general election promises to raise spending with “no clear plan” to finance it.

The UK is currently rated Aa2 – the third highest grade.

Credit ratings agencies grade countries and institutions by their credit-worthiness. That in turn can affect the amount that it costs countries to borrow money.

Moody’s stripped Britain of its top-notch AAA rating in 2013, before downgrading it again in 2017.

All the major political parties have committed to ramping up borrowing as part of their general election campaigning.

They have said this is to take advantage of low interest rates. Moody’s change in outlook suggests this could alter in the future.

Moody’s said its concern was that the UK’s debt level could rise as a result. “In the current political climate, Moody’s sees no meaningful pressure for debt-reducing fiscal policies,” it said.

Jane Foley, from Rabobank, said to borrow more – without increasing debt levels – you need to see economic growth which is “a big ask when global growth is slowing and when UK investment has been chased away by political uncertainty”.

Analysis: Should we care?

Following the financial crisis the credit ratings agencies were discredited for giving gold-plated ratings to companies that later collapsed.

The last time that the UK’s rating was downgraded, in 2017, there was little impact on borrowing costs. We are still in the “A” band of countries, even if no longer on a par with Germany.

So for some in the City, these reports can be easily dismissed. “It just tells us stuff we already know,” one investor told me.

But the language and timing of this (long-scheduled) report are sobering, coming as it has when politicians are looking to splash out, making big promises about the future of the UK’s public services.

It ends by saying a downgrade would happen if policy-makers don’t have a credible strategy to cut debt. And cutting debt doesn’t seem to be on anyone’s manifesto.

The Moody’s report said “deep divisions within society and the political landscape” underpin its decision because they are reducing the UK’s ability to make policy decisions.

It said even if a deal was struck with the European Union over Brexit, that uncertainty over the future of trade is unlikely to diminish.

However, the agency said it has decided to hold the UK’s current rating because it still saw positives in the economy such as a broad range of economic activity, a sound monetary policy framework and a highly flexible labour market.