US Airbus row: European goods hit by new US tariffs 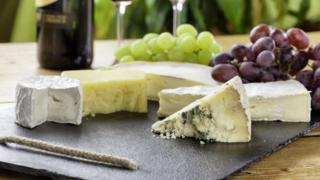 Many products made in the EU have become more expensive for buyers in the US.

The US imposed tariffs on $7.5bn (£6.1bn; €6.7bn) on EU goods just after midnight in Washington DC on 17 October (04:01 GMT on Friday), after the World Trade Organization ruled in its favour earlier this month.

This is the result of a 15-year battle over aircraft subsidies paid by the EU to Airbus which have been ruled illegal by the WTO.

As a result a long list of Europe-made goods has been issued that is now subject to a 25% tariff.

They may represent a small fraction of EU imports, which totalled $684bn (£531bn) last year, but suppliers and buyers are justifiably concerned.

The EU says it will have no choice but to respond with its own tariffs on US goods next year, because of US government tax breaks for Boeing.

So what are the European products being singled out now?

Italian Pecorino, British Stilton, Dutch Edam… Cheeses of all styles and flavours from across Europe are now going to be hit by the tariffs, with few exceptions.

The tariffs come as European cheeses become more popular in the US, and tastes for home-grown American variants wane.

In the US, speciality cheese sellers have spent the last few months stockpiling European cheeses ahead of the charges coming into effect, in an attempt to shield their customers from higher prices.

Mike Bowers, who owns an artisan fromagerie in Washington DC, told CNBC that he had bulk-bought cheeses from EU countries: “I’m a small guy. I can’t buy a $100 cheese and sell it for $50 and expect to stay in business too long.”

The tariffs also apply to wine produced in France, Germany, Spain and the UK – but not Italy.

This is likely to hit European vineyards hard. In 2017, 32% of all of the wine exported by the EU to non-EU countries went to the US.

President Donald Trump has singled out French wine before. In June, he promised to “do something” about a trading arrangement that he claimed was “not fair”.

“France charges us a lot for the wine. And yet we charge them very little for French wine,” he told US media at the time.

“So the wineries come to me and say, ‘Sir’ – the California guys, they come, ‘Sir, we’re paying a lot of money to put our product into France, and you’re letting’ – meaning, this country is allowing – ‘these French wines, which are great wines, but we have great wines too – allowing it to come in for nothing. It’s not fair’.

“And you know what? It’s not fair. We’ll do something about it.”

Liqueurs, such as Italy’s Limoncello, Fernet and Amaretto, are also affected.

According to the Scotch Whisky Association (SWA), Scotland exported about $1.3bn of Scotch to the US in 2018 – 33% of which was single malt.

That translates to just under 25 million bottles of single malt Scotch.

SWA chief executive Karen Betts has warned that “jobs could be at risk” at Scottish distilleries as a result of the tariffs.

“In time, consumer choice will diminish and Scotch whisky companies will start to lose market share,” she said.

“In Scotland and throughout our UK supply chain, we expect to see a dropping-off in investment and productivity.”

The tariffs will affect thousands of olive-growing families in Andalusia, southern Spain, which is home to the world’s largest olive oil industry.

Currently, the region is responsible for about half the global output of olive oil.

“I don’t get it why an agreement that politicians have with Airbus has to be paid by olive farmers. I just don’t understand,” Pablo Casado, who has grown olives for 40 years, told Reuters news agency.

“In these 40 years, we have never had a situation like this … The survival of the olive grove is in danger.”

However, the new duties will not apply to Italy or Greece, the second and third-largest producers respectively.

Some luxury fashion items have been hit by tariffs too – leaving tailors on London’s Savile Row worried.

Kathryn Sargent, the street’s first female master tailor, told the BBC’s Dearbail Jordan that clients in the US made up a third of her business. She regularly travels to US cities for suit fittings.

“It is a conversation that I’ll be having with my clients when I’m over there, to sense what their reaction is and to see if it puts them off placing future orders,” she says.