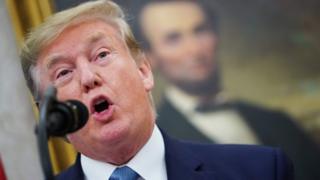 The increases will affect about $550bn of Chinese imports

President Donald Trump has hit back at China by announcing new higher tariffs on imports – escalating a mounting trade war between the two nations.

In a series of tweets on Friday, Mr Trump announced an additional tariff increase of 5% on imports from China.

The move came hours after the president hit out at Chinese plans to hit $75bn (£61bn) of US goods with duties.

Mr Trump described their action as “politically motivated” and has accused them of “taking advantage” of the US.

“Sadly, past administrations have allowed China to get so far ahead of fair and balanced trade that it has become a great burden to the American taxpayer,” Mr Trump tweeted. “As president, I can no longer allow this to happen!”

Mr Trump has also said he had “hereby ordered” American companies to look for alternatives to China and suggested they make products in the US instead.

His furious reaction came after Beijing announced new tariffs on US goods.

China unveiled plans to increase duties between 5% and 10% on more than 5,000 US products including agricultural goods, aircraft and crude oil. It will also reimpose a suspended 25% duty on US car imports.

The new tariffs, set to affect about $75bn of US goods, will be imposed in two stages on 1 September and 15 December.

What has Trump announced?

In a series of Friday evening tweets, Mr Trump said the US would raise its tariffs on $250bn of Chinese imports from 25% to 30% starting on 1 October.

President Trump unveiled the 10% tariff plan on 1 August – blaming China for not following through on promises to buy more American agricultural products.

Those tariffs, imposed on items like electronics and clothing, were expected to be introduced at the beginning of September but some have been delayed until mid-December to avoid hitting US Christmas shoppers.

The latest developments in the trade war have sent global financial markets tumbling.

The Dow Jones Industrial Average lost more than 620 points, or 2.4%, on Friday while London’s FTSE 100 and the German DAX also turned negative.

On Friday Mr Trump turned his fire against the head of the US central bank, Jerome Powell, after he spoke out about the economic risks of a trade war.

In a tweet, the president went as far to question whether Federal Reserve chairman was a greater “enemy” than China’s leader Xi Jinping.