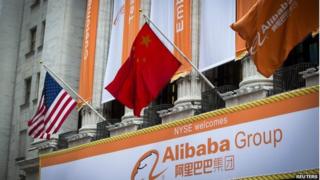 Alibaba listed on the New York Stock Exchange in 2014

The White House is reportedly considering de-listing Chinese companies from US stock exchanges as part of a broader effort to curb US investment in China.

The US is also said to be looking at limiting the ability of government pension funds to participate in Chinese markets.

The discussion comes amid a tense trade stand-off between the two countries.

US stock exchanges dropped on the news, which Bloomberg first reported.

Shares in Chinese companies listed in the US, which include big names such as Alibaba and JD.com, also fell sharply after the reports.

More than 150 Chinese companies are listed on the major US exchanges, As of February, they were worth a total of $1.2 trillion in market value, according to the US-China Economic and Security Review Commission.

Their presence has prompted debate in the US.

Critics, such as US Senator Marco Rubio, have said US investors are at risk since Chinese law shields their financial statements from audit by US regulators.

In June, a group of senators, including Mr Rubio, put forward a bill that would de-list Chinese firms if they do not make audits available to US regulators within three years.

Any White House plan would have to be approved by US President Donald Trump. He has signed off on the discussion, but no action is imminent, Bloomberg said.

US and Chinese officials are due to meet next month for another round of trade discussions. So far, that dispute – triggered by US complaints of Chinese protectionism – has shown little sign of resolution.

The two sides have imposed tariffs on thousands of items worth hundreds of billions in annual trade.

The US is due to impose another round of tariffs next month.