US job creation larger than expected 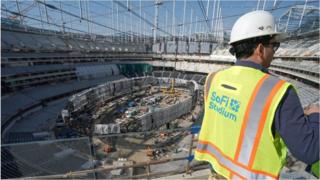 The US economy added 225,000 jobs in January, beating forecasts.

Economists polled by the Reuters news agency had forecast that payrolls, excluding farm workers, would rise by 160,000.

However, the unemployment rate edged up to 3.6% from 3.5% in December, as more Americans were registered as working or looking for work.

“However, with concerns around the coronavirus intensifying, continued trade talks and Brexit negotiations at play, investors should remain cautious of evident risks to the stock market in the near-term.”

Average hourly wages increased 0.2% last month, while the annual increase was 3.1% in January, up from from 3.0% in December.

Federal Reserve chair Jerome Powell has said the growing workforce and slightly higher unemployment, “represents more labour supply, and it may be holding down wages” when compared with other economies.

Separately, the US Labor Department said 514,000 fewer jobs were created between April 2018 and March 2019 than originally estimated. It is the biggest statistical downgrade since 2009.