US jobs growth jumps in November 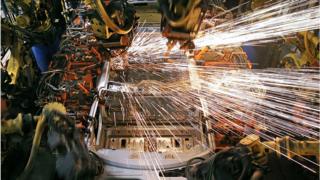 The US economy added the largest number of jobs for 10 months in November, with the latest figure comfortably beating analysts’ expectations.

The jobs growth was helped by striking GM workers returning to work and a big rise in healthcare posts.

The US economy has been expanding moderately despite a long-term slump in manufacturing.

“The upbeat data reinforces the strength of both the labour market and consumer confidence, despite slowing global growth and continued trade uncertainty.”

Ian Shepherdson, chief economist at Pantheon Macroeconomics, said the jobs numbers were “astonishing”, but could be revised down at some point.

“This is wild,” he said. “That [jump is] hard to square with leading indicators, all of which tanked in the late summer and early fall, so it seems like a candidate for a big downward revision.”