US jobs growth slows in December 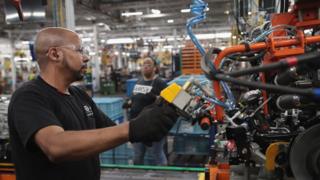 The US economy added a lower-than-expected 145,000 jobs last month, the latest official figures have shown.

The figure marks a slowdown from November’s figure of 256,000, when the statistics were boosted by striking GM workers returning to work.

The data for October and November was revised down to show 14,000 fewer jobs were created than previously estimated.

The unemployment rate remained unchanged at 3.5% in December, according to the US Labor Department.

The monthly jobs gain was lower than the 164,000 predicted by analysts, while earnings growth also slowed.

Average hourly earnings rose at an annual rate of 2.9% last month, down from November’s rate of 3.1%.

The sectors seeing the biggest gains in jobs last month were retailing, which added 41,000 jobs, and health care, which saw an increase of 28,000.

The number of manufacturing jobs fell by 12,000, compared with a rise of 58,000 in November when the GM strike ended.

“The key point here is that payroll growth is performing far better than implied by a host of leading indicators in late summer and fall,” said Ian Shepherdson, chief economist at Pantheon Macroeconomics.

“Businesses appear to have over-estimated the real impact of the trade war, distorting their survey responses. Payroll gains averaged a very solid 184,000 in Q4, and we have no reason to expect much change in Q1.

“If we’re right, the unemployment rate will keep falling, heading towards 3% by the end of the year.”