US plans limits for ’emotional support’ animals on flights 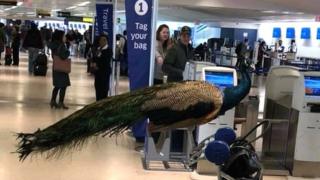 The US is seeking to limit the kinds of animals that airlines must allow on board for free.

The Department of Transportation has proposed to restrict that right to dogs that are trained to help people with disabilities.

It said the plan is a response to concerns that increasing passengers are falsely claiming pets as “service animals”.

The proposal is subject to public comment before it goes into effect.

Among other changes, the proposal would mean that so-called emotional support animals are no longer entitled to the same rights as “service animals”.

While passengers could have psychiatric service animals, that classification would require animals to have training.

US airlines welcomed the plans. They had called for action, saying a rising number of animals travelling in airplane cabins has led to growing complaints and incidents such as biting.

“Airlines want all passengers and crew to have a safe and comfortable flying experience, and we are confident the proposed rule will go a long way in ensuring a safer and healthier experience for everyone,” said Nicholas Calio, president of industry lobby Airlines for America.

The changes, if they move forward, would bring the US closer to the UK, which does not recognise “emotional support” animals.

In the US, passengers attempting to bring turkeys, peacocks and squirrels inside plane cabins in recent years have drawn attention to the issue and prompted some airlines to tighten their rules on their own.

American Airlines, for example, prohibited flying with frogs, ferrets, hedgehogs and goats, even if they are therapy animals.

Delta noted in 2018 that some passengers “attempted to fly with comfort turkeys, gliding possums known as sugar gliders, snakes” and spiders.

The Department of Transportation proposal would allow airlines to limit the number of animals passengers may bring with them, impose size rules and require paperwork certifying their service animals.

However, airlines would not be allowed to refuse transport to service animals based on breed.