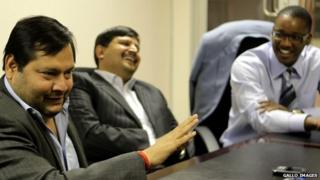 The US has placed economic sanctions on members of Gupta family and a business associate for their alleged roles in a “significant corruption network” in South Africa.

The Guptas have denied wrongdoing.

The order forbids US entities from doing business with the men or handling their assets.

The US said the Guptas engaged in “pay-to-play political patronage, which was orchestrated at the expense of the South African people”.

“The Guptas and [Salim] Essa have used their influence with prominent politicians and parties to line their pockets with ill-gotten gains,” US Treasury official Sigal Mandelker said. “We will continue to exclude from the U.S. financial system those who profit from corruption.”

The order applies to Ajay, Atul, and Rajesh Gupta as well as Salim Essa.

US officials said it is intended to support South Africa’s ongoing inquiry into the alleged corruption. It further isolates the Guptas, who had already been blacklisted at several South African banks.

How did this start?

The Gupta brothers arrived in South Africa from India in the 1990s and established computer business Sahara, later buying up stakes in mining and engineering companies, a luxury game lodge, a newspaper and a 24-hour news TV station.

They are accused of bribing officials to advance their business interests and win government contracts. They also employed members of Mr Zuma’s family.

Those ties had long shielded the family, but in 2018, with Mr Zuma’s grip on power slipping, South African police raided the family’s Johannesburg compound. Mr Zuma resigned shortly after.

The Guptas had already left the country, reportedly for the United Arab Emirates. At the time, many of their businesses were also in the process of closing down, changing hands or being targeted for seizure by authorities.

The scandal tarnished several global companies that had worked in the country, including financial consultants McKinsey, accounting giant KPMG and software firm SAP.