US set to impose $7.5bn of EU tariffs in Airbus row 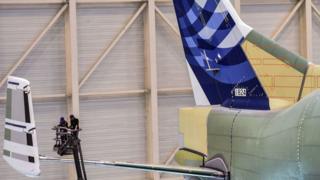 The US has been given the go-ahead to impose tariffs on $7.5bn (£6.1bn) worth of goods it imports from the European Union.

It is the latest chapter in the 15-year battle between the US and the EU over subsidies given to Airbus and its American rival Boeing.

The decision was made by the World Trade Organization (WTO) which handles trade disputes.

It could mean tariffs on goods ranging from planes to shellfish are imposed.

The US had announced in April that it was considering imposing tariffs on about $11bn (£8.4bn) worth of goods from the European Union in response to subsidies that support Airbus.