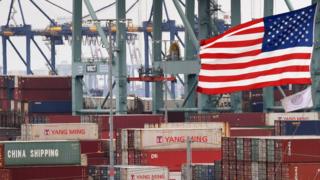 New tariffs on $156bn of Chinese goods will be imposed if a trade deal is not agreed by 15 December, the US Treasury Secretary has warned.

But his caution, during a CNBC interview, seemed in contrast with the president’s optimism last week.

Wall Street shares dipped at the open on worries about reaching a final deal.

Last Friday, the US agreed to hold off on a planned 25%-30% tariff increase on Chinese imports that was due to come into effect on Tuesday. It followed two days of talks in Washington between Liu He, China’s vice-premier, and US officials.

President Donald Trump, who described the talks as a “love fest”, said the preliminary deal would take about five weeks to complete.

But Mr Mnuchin told CNBC: “I have every expectation if there’s not a deal, those tariffs would go in place – but I expect we’ll have a deal.”

There are still major issues to be negotiated, including industrial subsidies and cybertheft.

Mr Mnuchin said more trade negotiations at various levels would take place over the coming weeks, including a phone call between himself, US Trade Representative Lighthizer, and Mr Liu.

Asked on CNBC about a dispute between China and the US National Basketball Association, stemming from a tweet by Houston Rockets manager Daryl Morey expressing support for pro-democracy protests in Hong Kong, Mr Mnuchin said he hoped the two sides could come to a solution.