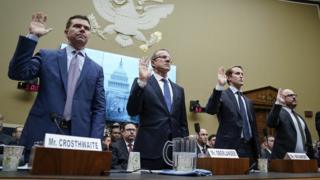 US lawmakers called for tougher rules for e-cigarette companies at a hearing on Wednesday as they blamed executives for introducing a new generation to nicotine.

The US is looking to write new industry rules amid rising concern about vaping among teenagers.

Companies have said they have taken their owns steps to curb usage.

New Jersey congressman Frank Pallone said such actions were “too little too late”.

“The significant progress we made to curb tobacco use has simply vanished,” he said, adding that he held the manufacturers responsible.

“If you wanted to be men of integrity, you would not be selling this product. You’d be doing something else”.

Some critics say the products, often sold in flavours like mint or vanilla, are appealing to teenagers. That comes despite concerns about the health risks of nicotine.

More than 27% of US teenagers aged 14-18 and about 10% of those aged 11-13 had used e-cigarettes at least once in the past 30 days, according to a survey by the Centers for Disease Control.

About a fifth of older teens said they had used vaping products “frequently”.

From May, companies selling e-cigarettes in the United States will have to be approved by the Food and Drug Administration.

Firms said they shared concerns about vaping among teenagers, which they said threatened to undermine the industry.

“I know it puts it all at risk if we don’t make progress here,” said KC Crosthwaite, chief executive of Juul Labs, one of the biggest vape producers in the US.

Juul has been a focus of criticism, with some accusing it of marketing to teenagers.

Amid the backlash, it has suspended advertising and stopped sales of most flavours, including mint, which had accounted for about 70% of its sales.

The actions have cut into the firm’s business. Marlboro-maker Altria, which took a 35% stake in the business in 2018, recently wrote down the value of its investment by about two-thirds.

Tobacco group Imperial Brands has also warned investors that the crackdown on vaping would hurt growth.