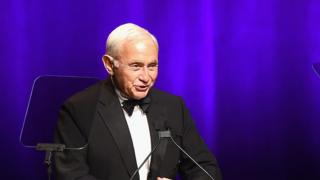 The head of Victoria’s Secret has told investors he is “embarrassed” by his long friendship with the late US financier Jeffrey Epstein.

The remarks were the latest effort by L Brands boss Les Wexner to distance himself from Mr Epstein, who died in prison while awaiting trial for sex trafficking charges in August.

Mr Wexner employed Mr Epstein as a close adviser, but cut ties in 2007.

He has previously accused Mr Epstein of misappropriating money.

“Being taken advantage of by someone who is… so depraved is something I’m embarrassed I’m even close to,” Mr Wexner said at his company’s annual investor day.

The backlash over Mr Wexner’s long friendship with Mr Epstein has added pressure on the billionaire, whose leadership was already under scrutiny due to falling sales at Victoria’s Secret.

“In the present, everyone has to feel enormous regret for the advantage that was taken of so many young women,” he said.

“At some point in your life, we are all betrayed by friends, and if we haven’t, we’re really fortunate to have lived a perfectly sheltered life,” he added.

Mr Epstein, who worked as a teacher before moving into finance, once boasted a high-flying social circle that included Prince Andrew, former US President Bill Clinton and Donald Trump, among others.

He died in prison in August, awaiting trial on charges that he paid girls under the age of 18 to perform sex acts at his Manhattan and Florida mansions between 2002 and 2005.

He had avoided similar charges in a controversial secret plea deal in 2008, and instead pleaded guilty to a lesser charge.

Outcry over that plea deal led US Labor Secretary Alex Acosta – who had overseen the deal as a former prosecutor – to resign this summer.

The head of the MIT Media Lab also recently resigned following revelations about the academic centre’s ties to Mr Epstein.