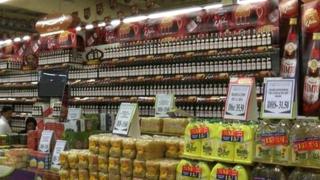 The makers of Vimto have warned that a new soft drinks tax in parts of the Middle East could hit its profits.

Nichols, based in Newton-le-Willows, Merseyside, said the 50% levy in Saudi Arabia and UAE was a concern.

It warned that it could lead to profits “materially below” current predictions for the fruit-flavoured cordial which was invented in Salford in 1908.

The Saudi and UAE market is worth £7m annually to Nichols whose shares fell 16% on the news.

Its shares were down 265p to 1,435p following the profit warning.

Company bosses said it was too early to say exactly how big the impact could be but insisted their position in the two countries remains strategically important.

Sales in 2019 were up 4% compared with a year earlier, despite a slowdown in the UK soft drinks market, Nichols said.

Vimto has become associated with the holy month of Ramadan, a period which accounts for a large part of the cordial’s entire sales.

It has become something of a tradition for many Muslims to end a day of fasting with a date and a glass of the purple liquid as a sugar-boost for flagging energy levels.

A company statement said: “The actual impact on sales in the Middle East will not be known until after the Ramadan trading period, which accounts for approximately 80% of annual in-country revenues.

“Whilst there is a broad range of possible outcomes, we believe the impact of the tax could be material to the group and may result in profit before tax for (2020) being materially below current expectations.”

The new tax was introduced in December in Saudi Arabia and UAE whose governments are looking for other ways to raise funds that do not rely on oil.

Unlike the UK’s sugar-based levy, the tax in Saudi and the UAE is on all non-carbonated soft drinks, regardless of whether they contain sugar or artificial sweeteners.