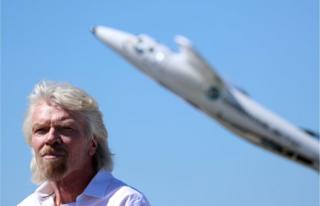 Virgin Galactic, the space venture backed by Sir Richard Branson, is ready to launch – not into space but on the New York Stock Exchange (NYSE).

Shares in Virgin Galactic are set to start trading on Monday, a first for a space tourism company.

Taking the firm public will “open space to more investors and in doing so, open space to thousands of new astronauts,” Sir Richard said at the time.

Shares in Social Capital Hedosophia, which will start trading under the ticker SPCE on Monday, jumped 11% on Friday in anticipation of the debut.

Virgin Galactic is racing with Elon Musk’s SpaceX and Jeff Bezos’s Blue Origin to be the first company to send fee-paying passengers into space.

The company, founded in 2004, has spent more than $1bn developing its programme, which is years behind schedule and took a hit after a fatal accident in 2014.

Virgin Galactic’s plane will be carried to a height of 12,000m before its rocket ignites

However, Virgin has told investors it hopes to make 16 trips to space with customers as soon as next year.

In a presentation, it predicts that revenue will skyrocket as the number of flights increases.

About 600 people, including pop star Justin Bieber, have already put down deposits for the 90-minute experience at a price of about $250,000 per ticket, according to the company.

“No disrespect, but Virgin Galactic is both a plan and a dream, rather than a secure future cash flow,” he concludes in his write-up of the company.

Social Capital Hedosophia took a 49% stake in Virgin in exchange for a roughly $700m investment.

In addition, Virgin recently announced that US aerospace giant Boeing would invest $20m by buying shares.

Sir Richard last year said Virgin would not move forward with talks on possible investment from Saudi Arabia after the murder of journalist Jamal Khashoggi.