Volkswagen in ‘Dieselgate’ talks with motorists 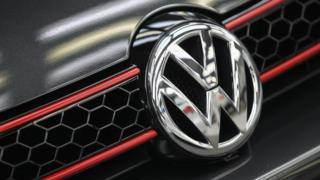 Volkswagen has said it is in talks with a group of German drivers who are suing the car giant over excessive emissions from its diesel cars.

The motorists say they were affected when VW “cheated” emissions rules by installing unlawful “defeat devices” in its diesel cars.

The carmaker and the Federal Association of Consumers (VZBV) said the talks were at an early stage.

There was “no guarantee” of a settlement, they said.

“The common goal of VZBV and Volkswagen is a pragmatic solution for the benefit of the customer,” they declared, adding that they had agreed to keep the talks confidential.

The class action case is among the first of its kind in Germany.

Because of a new draft law in 2018, consumer rights groups became able to represent customers taking companies to court – and to bear their costs.

VZBV, an umbrella group of consumer associations, is state-financed and represents a wide range of members, from building owners to workers to the German cycling federation.

Proceedings began in September 2019 in a local court near the VW factory, the Higher Regional Court of Brunswick. Deliberations had to be moved to a town hall, as so many attended, according to a Reuters report.

VW disclosed in 2015 that it had used illegal software to manipulate the results of diesel emissions tests.

At the time, the company said that about 11 million cars were fitted with the “defeat device”, which alerted diesel engines when they were being tested. The engine would then change its performance in order to improve the result of the test.

Since the scandal broke, the carmaker has spent more than €30bn (£25bn) in legal costs and fines.

In May 2019, the company, which also owns Audi, Bentley, Bugatti, Lamborghini, Porsche, Seat and Skoda, said in its annual report that it had set aside a further €1bn (£847m) in legal provisions which included this case.