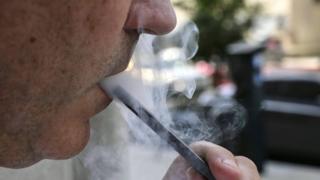 Walmart has said it will no longer sell e-cigarettes in the US, amid mounting calls to ban the products entirely.

The retailer said its decision was due to “uncertainty” about the rules governing e-cigarettes, which US health authorities have linked to more than 500 cases of lung injury.

US President Donald Trump last week said the US would prohibit sales of all flavoured e-cigarettes.

On Friday a group of US senators called on health authorities to remove all pod and cartridge-based e-cigarettes from the market until it can be proven the products are safe.

The crackdown has also spread overseas, where this week India said it would ban e-cigarettes.

“Given the growing federal, state and local regulatory complexity and uncertainty regarding e-cigarettes, we plan to discontinue the sale of electronic nicotine delivery products at all Walmart and Sam’s Club US locations,” Walmart said.

“We will complete our exit after selling through current inventory.”

E-cigarettes were initially welcomed as a safer alternative to traditional tobacco cigarettes.

Doctors, public health experts and cancer charities in the UK continue to say that, based on current evidence, e-cigarettes carry a fraction of the risk of cigarettes.

In the US, however, a surge in teen vaping has spurred a backlash against the products, which contain nicotine, which is addictive.

This summer, the US Centers for Disease Control linked vaping to a mysterious outbreak of lung injuries, in which eight people have died and more than 500 taken ill so far.

All of the cases involve patients with a history of vaping or e-cigarette product use. Most but not all have also reported using THC, the chemical in marijuana, the agency said.

In May, Walmart, America’s biggest retailer, said it would stop selling fruit-flavoured e-cigarettes, which have been blamed for appealing to youth.

Walmart continues to sell guns and traditional cigarettes, but it has imposed new limits on those products.

In May, the company said it would not sell traditional cigarettes to those under the age of 21.

Walmart also announced this month that it would stop sales of certain types of ammunition and guns.