Warm weather kept shoppers away from Next 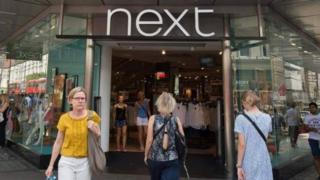 High Street retailer Next has blamed the hot weather for poor sales in August and September.

A bellwether for the High Street, Next said sales had improved in October as the temperature fell.

Its shares were the biggest fallers in the FTSE 100 index even as analysts said the figures were “solid”.

The shares hit their highest levels in a year earlier this month.

The company said the third quarter numbers meant it was on track to meet its guidance of full-price sales up 3.6% and pre-tax profit of £725m.

It said sales in July – which rose a better-than-expected 6.8% – “pulled forward” sales from August.

“Sales in September [up 1%] were adversely affected by unusually warm weather and we saw a significant improvement in October when temperatures fell,” the retailer said in a trading statement.

“We believe the improved sales growth in October recouped some of the lost sales in September and we do not expect sales growth for the rest of the year to be as strong as October,” the company added.

Sales in October were up 5%.

“Winter ranges suffered from unseasonably warm and unsettled weather at the start of the quarter, but the trading period was saved as temperatures fell in October which spurred on demand.

“While pure in-store sales remained under pressure, online continued to impress with both physical and digital channels working in harmony to deliver growth in a tough market.”

But, he said that the market was under pressure and said the news on Tuesday that there would be a general election on 12 December “couldn’t come at a worse time for retailers”.

But, he added “bellwether Next has delivered another solid trading update”.