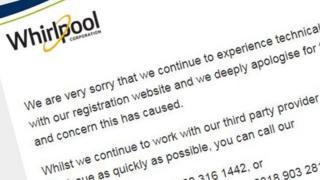 The company has apologised to customers about the fault

Worried owners of Hotpoint and Indesit washing machines are still struggling to access a recall website to check whether their machine is a fire risk.

Half a million appliances need to be fixed or replaced as their door locking system can overheat.

But manufacturer Whirlpool’s model checker website has been blighted by technical difficulties.

The company has apologised for the safety issue and has now had to say sorry again for the IT fault.

“The issue is due to a third-party system provider. We understand that it is not related to traffic to the website,” a spokesman said.

“The system provider is working to fix the issue as quickly as possible.”

An alternative phone line has also been set up – on 0800 316 1442 – although, as it connected to the same system, customers are facing difficulties accessing that too.

Seventy-nine fires are thought to have been caused by the overheating door locking system, a fault which develops over time, according to Whirlpool, which owns the brands.

Steve Smithson, from Romford in Essex, was forced to call in an engineer when he had noticed a smell of burning and smoke coming out of his Hotpoint washing machine.

He said: “I immediately jumped up and turned the plug off, took the washing out – it really smelled – and checked the code. It said faulty door lock code.

The engineer said that this was the fourth one he’d done in less than a week. He said we were quite lucky, as another person had the front of their machine almost melt due to the heat.”

For those who eventually discover that their machine is one of those at risk of catching fire, the process of fixing or replacing it will begin in January. It should be unplugged until fixed. The company would not be drawn on when everyone’s case will be dealt with.

As a result, owners may have to cope without their washing machine for months. The company is refusing to offer refunds and anyone who buys an alternative will not be able to charge Whirlpool for the cost.

The fix must also be carried out by a Whirlpool engineer, so owners should not attempt to hire their own engineer to get the work done quicker.

Instead, Whirlpool suggested owners could still use the machine, but with a vastly reduced risk, by only using the cold wash cycle at 20C or less. This means the heating element would not be activated, avoiding the chain of events that can lead to the door locking system overheating.

Whirlpool has already been embroiled in a four-year scandal over tumble dryer safety. Dangerous appliances under the Hotpoint, Indesit, Creda, Swan and Proline brands were sold in the UK for 11 years from 2004.