Water bills to be cut by £50 in industry shake-up 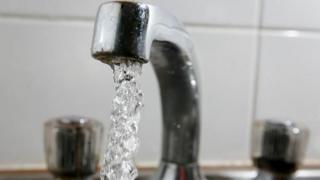 Water firms in England and Wales will have to cut the average bill by £50 over the next five years, under plans published by the industry regulator.

The regulator also wants water firms to cut water lost to leaks by 16%.

Oftwat chief executive Rachel Fletcher said its plan was “firing the starting gun on the transformation of the water industry”.

“Now water companies need to crack on, turn this into a reality and transform their performance for everyone,” she added.

There has been widespread dissatisfaction with the performance of many water companies over the past few years. Criticism has centred around some high profile pollution incidents as well as leaks, water quality and high bills.

Ofwat’s five-year plan, which comes into effect on 1 April 2020, has been hammered out over the course of this year. The draft determinations were set out in July.

However, not all firms are likely to be happy with the outcome, Ms Fletcher conceded in an interview with the Today Programme. She said dissatisfied firms had the option of appealing to the Competition and Markets Authority over the price targets.

But it’s cheaper for these companies to borrow, so bills should come down, she says.

“We’ve said all along this was going to be a tough review,” she said. “We think this is the greenest package ever for water companies.”

Population growth and climate change will be the big challenges for them in the long term, she added.

Since becoming private firms rather than public bodies, water companies have been saddled with about £50bn debt and have paid £56bn in dividends to investors.

“We have not been lax on these companies,” Ms Fletcher insisted. She said it would now be harder for companies to pay shareholders dividends.

“We are seeing increasingly the penny drop with companies, some announcing they expect no dividend in the next five years.”

In January, a review of water companies’ performance found only three out of 17 water firms in England and Wales were of an acceptable standard.

In response the regulator drew up plans outlined in draft form in July which it said would mean “better services, a healthier natural environment and lower bills”.

Office of Water Services is the government regulator tasked with overseeing the privatised water market in England and Wales. Scotland has its own separate regulator, the Water Industry Commission for Scotland.

Ofwat monitors the market to see if it needs to intervene to protect customers and to set limits on the price they’re asked to pay.