‘We swapped the Christmas do for a conference’ 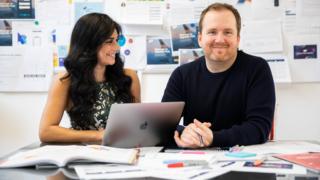 Craig Unsworth and business partner Urchana Moudgil found it is tax efficient to swap the Christmas do for a conference.

Is the traditional office Christmas party still fit for purpose?

Mr Unsworth, who runs Upgrade Pack, a business travel app, thinks the “stereotypical” Christmas party that involves “Sandra getting off with somebody behind the photocopier” no longer appeals to staff.

“It’s all very funny and all but actually, it’s not what most people want,” he says.

Instead, the 35 or so staff at Upgrade Pack are treated to a two-day away day which is held in November rather than December.

Mr Unsworth reckons the cost of the mini conference comes to between £5,000 and £6,000, which he thinks is good value compared to other activities.

And, he says, it is tax efficient because HMRC allows businesses to spend £150 a head for staff parties that are twinned with a conference or an away day.

Mr Unsworth is not alone in watching the cost of the office Christmas do.

A study commissioned by supermarket Morrisons found that more than two thirds of people expected cut backs to their work Christmas party this year due to tough trading conditions, economic uncertainty and fragile confidence.

The survey of 1,000 UK workers also revealed that one in 20 workers expected their work Christmas bash to be cancelled altogether.

But that could have a serious impact on morale, says business psychologist Ros Taylor, who says reducing the Christmas party budget was a sign bosses undervalue their employees.

“There are loads of ways to challenge expenditure,” she says. “But not the Christmas party.”

Mr Unsworth says that while there are company sessions at Upgrade Pack’s away days, it’s not all work.

And in the evening they have a party, although Mr Unsworth describes it as “progressive”.

When they went to Edinburgh last month, the party started with a pub crawl, “which was all very tame”, according to Mr Unsworth.

“Then we ended up in a piano bar, which was not tame at all,” he says.

“It doesn’t have to be cocktails till you drop. A little bit of lubrication at the beginning is really all that it takes for folks to have a great time.”

Otherwise, she warns, staff could succumb to the “disinhibition of alcohol”.

“If there’s a completely free bar, I think you’re in danger of people cavorting in a way that will not be tolerated and will make them unhappy in the morning,” she says.

Justin Sayers, who runs The Office Christmas Party – a firm that plans festive work events – says he’s noticed a 5% drop in the amount groups spend on drinks since last year.

Instead, he says, there has been a greater focus on creating evenings with a distinctive theme.

Although he acknowledges that it’s good that people go out and relax “after such a year”.

The tendency to drink less has, perhaps unsurprisingly, coincided with an improvement in behaviour.

“People are very, very aware these days that behaviour is important,” says Greg Lawson who runs Smart Group, which puts on Christmas dos.

“If you’re going out on something that is – for all intense and purposes – a work outing … you’ve still got to remember that you are with your business.”

“They’re still enjoying themselves, they’re not going over the top,” Mr Lawson says.

But if things do get out of hand, Mr Lawson recommends having good security on site to rein in bad behaviour.

It would seem that his bigger, more high-profile customers agree.

“Large blue-chip companies often will bring their internal security as well to make sure that they’re working hand in glove with ours,” he says.

“They’ve got much more in the way of knowledge of who’s who and they’re able to deal with anything that might come up on the night.”

But he doesn’t think the crack down in bad behaviour has put people off the office do.

“Christmas parties are still just as popular as they’ve ever been,” he says.