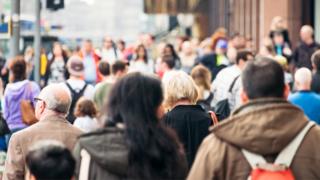 The UK’s economy grew by just 0.1% in the three months to November, according to the Office for National Statistics.

Growth was slightly stronger in September and October than previously thought, but fell 0.3% in November, dragging down the three-month figure.

The ONS said growth in the economy year-on-year was at its lowest since the spring of 2012.

Growth in construction was offset by a weakening service sector, while manufacturing was “lacklustre”.

What happened in the three-month period?

The figure of 0.1% growth was better than expected, said analysts.

ONS head of GDP Rob Kent-Smith said: “Overall, the economy grew slightly in the latest three months, with growth in construction pulled back by weakening services and another lacklustre performance from manufacturing.

“The UK economy grew slightly more strongly in September and October than was previously estimated, with later data painting a healthier picture.”

The revised ONS figures now show growth of 0.1% in each of those two months.

What happened in November?

In the month of November, GDP fell by 0.3%, which was worse than expected.

The ONS said the November decline was driven by falls in both services and production.

“Small increases across a small number of industries were more than offset by relatively large falls in several other industries, most notably scientific research and development, and wholesale trade, which each took 0.07 percentage points off monthly gross domestic product (GDP) growth.”

What are commentators saying?

“All of this data, however, relates to a period of heightened economic and political uncertainty last autumn due to Brexit and the general election.

“It is too early to say for sure if economic momentum will pick up in the new year now the political situation is clearer, but our latest survey of the financial services sector with the CBI does suggest some boost to optimism since the election.”