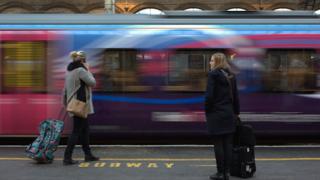 The UK’s competition watchdog has raised concerns train ticket prices could rise under the new operators of the West Coast Rail franchise.

FirstGroup and Trenitalia won the contract to run the rail route between London Euston and Glasgow or Edinburgh.

The Competition and Markets Authority said that on 21 routes, passengers would have little or no option but to choose a service run by FirstGroup.

FirstGroup said there were no competition issues on most routes.

The CMA said that following the first phase of an investigation into the new contract, it discovered that on 17 routes between Preston and Scotland passengers could only choose from West Coast Rail, operated by the joint venture between FirstGroup and Trenitalia, or from TransPennine Express, which is operated solely by FirstGroup.

It also pointed out that there were four routes between Oxenholme in the Lake District and Carlisle where travellers could only choose between the joint venture, TransPennine Express, and from one other company.

“The CMA is concerned this could lead to higher fares and less availability of cheaper tickets because train passengers would have no alternatives, or limited options, to choose from,” it said.

A spokesman for FirstGroup, said: “We have been discussing our plans for the new West Coast Partnership franchise with the CMA for several months and we are pleased that on the vast majority of routes, it has found no competition issues.

“Now that this update gives more clarity, we look forward to submitting our proposals which we envisage will satisfy their concerns.”

The CMA said that in previous cases, when it had raised competition concerns with rail companies, its concerns were resolved “by the companies agreeing to price caps on affected lines”.

But it said that if FirstGroup and Trenitalia’s proposals to guard against higher prices were insufficient, the CMA would launch a more in-depth investigation into the issue.

FirstGroup and Trenitalia won the contract to run the West Coast Rail franchise following a controversial process that saw Stagecoach banned from bidding for the contract in a row over pensions.

Stagecoach ran the franchise with Virgin Trains for more than 20 years.