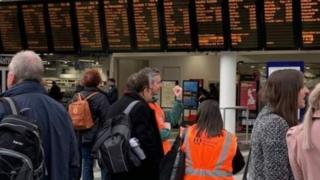 The firm saw its satisfaction levels plummet last year after cancellations and delays, including what was called a “shocking week of poor service”.

Transport Secretary Grant Shapps said it must rapidly improve services so people had trains they could rely on.

WMT said it had already improved and had developed a “robust recovery plan”.

The train operator, which also runs London NorthWestern services, apologised in November when it was revealed the number of compensation claims from passengers was 10 times higher than average.

Meanwhile, passengers in Rugeley, Staffordshire, said last summer they were regularly being ordered off trains which turned around earlier to make up for delays.

Mr Shapps said the firm, which took over the franchise in December 2017, had “failed to fulfil their obligations”.

“As a commuter myself I understand all too well the endless frustration caused by endless delays and cancellations,” he said.

The £20m funding will be used for measures including:

West Midlands Trains took over the franchise two years ago

Andy Street, the Conservative Mayor of the West Midlands, said he was pleased the money would be invested locally, adding he would keep WMT “under strict review”.

Julian Edwards, WMT managing director, who said in January more drivers were being recruited, said: “Our performance in the second half of last year was simply unacceptable and we apologise to all our customers for this.

“Passengers can be assured we have developed a robust recovery plan which builds on our recent improved reliability.”

The extra investment was on top of its £1bn investment commitment and would be used to benefit “all our customers and restores the reliable rail service they deserve”, he said.