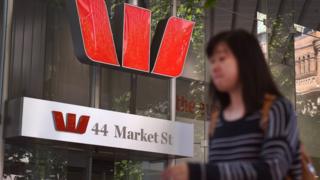 The Australian Transaction Reports and Analysis Centre (Austrac) said each breach carries a maximum a penalty of A$21m ($7.5m; £11m).

It is the second top Australian bank to face huge fines for breaching the laws.

Most of the breaches concern a failure to report international transfers to Austrac in a timely manner.

Austrac Chief Executive Nicole Rose said Westpac’s failure to properly report the transfers undermined “the integrity of Australia’s financial system” and “hindered its ability to track down the origins of financial transactions, when required to support police investigations”.

The unreported transactions amounted to more than A$11bn over a period of up to six years, Austrac said.

Those banks all disclosed relationships with high-risk or sanctioned countries, including Iraq, Ukraine and Zimbabwe.

“The risk posed to Westpac was that these high risk or sanctioned countries may have been able to access the Australian payment system through these nested arrangements, unbeknownst to Westpac,” Austrac said in its statement.

The agency also said there were a small number of transactions on accounts that were potentially linked to “child exploitation risks”.

It argued Westpac failed to implement the necessary automated detection procedures on these transactions.

Westpac’s share price dropped 2.5% in Sydney trading after the announcement.

The bank said it had self-reported the potential breaches to Austrac and had previously disclosed the investigation to shareholders in its annual results.

Westpac said it will update the stock exchange once it has assessed Austrac’s claims.

The country’s banking sector has also been the subject of a royal commission – Australia’s highest form of public inquiry – that earlier this year exposed widespread wrongdoing in the industry.