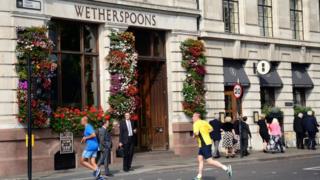 Going to the pub with your children? You may have to watch your drink consumption.

Wetherspoons pubs are limiting parents to two alcoholic drinks each if they have their children with them.

The rule came to light when the Robert Pocock pub in Gravesend, Kent, put up a poster publicising it.

The chain said its guideline for staff applied in its pubs nationwide, and was designed to deter “unruly behaviour” by children left unsupervised.

It has been a crime since 1902 to be drunk in charge of a child under the age of seven in a public place. The offence can be punished by a fine or up to a month in jail.

The poster at the pub, which has since been taken down, read: “As part of our licensing it is our responsibility to ensure that we are protecting children from harm.

The ruling has led to comments on social media.

A Wetherspoons spokesman said: “The manager took the decision to put the poster in the pub to emphasise to customers that she would not allow parents to drink while their children were running round uncontrolled in the pub.

“The notice had a positive effect, with mostly good feedback.”

Wetherspoons added: “There is a guideline, though not a policy, that we will serve the adult a maximum of two alcoholic drinks with their meal.

“The reason is that we don’t want children being unruly in the pubs and parents thinking they can continue to drink while this happens.”