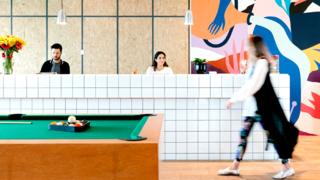 Inside a WeWork office

WeWork has officially scrapped plans to sell shares on the stock market, saying that it will instead “focus on the core business”.

The decision comes after the property company’s offering in August sparked little enthusiasm from investors, who had questioned the firm’s finances, governance and leadership.

“We have decided to postpone our IPO to focus on our core business, the fundamentals of which remain strong,” the firm’s new bosses, Artie Minson and Sebastian Gunningham, said in a statement.

“We have every intention to operate WeWork as a public company and look forward to revisiting the public equity markets in the future,” the added.

Founded in 2010, WeWork expanded from single co-working space in New York City to a global behemoth, with more than 500 locations around the world.

But the firm, recently renamed the We Co, continues to post significant losses, burning through more than $900m in the first six months of the year.

Reports suggested the firm’s expected valuation had sunk to between $10bn and $12bn, compared to the $47bn (£37bn) it fetched during Japanese investment giant Softbank’s most recent investment round.