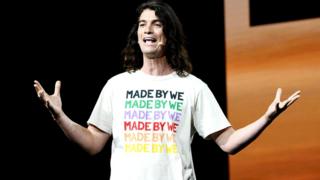 WeWork’s Adam Neumann has agreed to step down as chief executive of the trendy office rental firm saying it’s in the “best interests” of the company.

The decision is effective immediately, the firm said. He will remain with the company as non-executive chairman.

Scrutiny of his leadership had “become a significant distraction”, it said.

The move comes after plans for a stock market listing ran into trouble, with investors raising concerns about WeWork’s losses and governance.

“While our business has never been stronger, in recent weeks, the scrutiny directed toward me has become a significant distraction, and I have decided that it is in the best interest of the company to step down as chief executive,” Mr Neumann said in a statement.

Mr Neumann had built WeWork in his own image, creating a buzzy, multi-billion dollar company with more than 500 locations in 29 countries.

But the brash charisma that once drew investors in emerged as a liability as WeWork decided to sell its shares on the public market.

Perhaps most alarming to investors were the ways Mr Neumann has blurred the lines between his own personal finances and WeWork.

For example, the company is a tenant in properties that he owns; and Mr Neumann, who has voting control of the company, has also secured personal loans using company stock as collateral.

“I think many investors are uncomfortable with Neumann’s relationship with the company,” Sam Reynolds, a Taipei-based technology analyst, told the BBC.

Mr Neumann agreed to modify some of those arrangements after an investor backlash.

For example, he returned the $5.9m in stock he received for selling WeWork the trademark “We” and agreed to give WeWork any profit from properties he owns that the company leases.

His wife Rebekah, who had been given the power to identify a successor, also had her control of the firm reduced.

But even Mr Neumann’s role change may not assuage concerns about the company, which lost more than $1bn last year.

The company was relying on its stock market launch to unlock new loans – which means the delays could spell real trouble.

WeWork “put a new lease of life onto what is effectively an old, boring business model,” said Mr Reynolds.

He added that he expects the company to remain privately held for the foreseeable future.