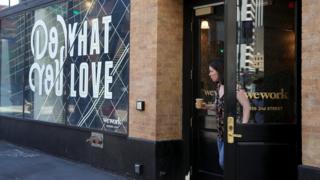 A WeWork shareholder has taken the company to court over the near-$1.7bn (£1.3bn) leaving package approved for ousted co-founder Adam Neumann.

Her lawsuit says the money granted to Mr Neumann is “beyond comprehension” and is “improper”.

It accuses Mr Neumann and WeWork investor Softbank of abusing their control of the company to sign off on the deal at the expense of smaller shareholders.

The suit marks the latest controversy over Mr Neumann’s relationship with the company. He stepped down as chief executive in September, after the company’s efforts to raise money through a stock market flotation collapsed, in part due to questions over his leadership.

After dropping its flotation plans, WeWork accepted a financing package from SoftBank, which included the exit deal for Mr Neumann, who agreed to surrender most of his shares and leave the board.

WeWork is now trimming its business, with thousands of job cuts expected. The value of its shares have plunged from prior investments to the latest financing.

It has told investors it plans to sell off businesses that are not part of its office rental operation, such as Wavegarden, which makes indoor surfing pools.

The lawsuit was filed in San Francisco Superior Court by Natalie Sojka, who worked for the company for one and a half years and received shares as part of her pay.

She has proposed it as a class action suit on behalf of herself and other minority stockholders.