What ancient Rome may teach on post-Brexit tourism 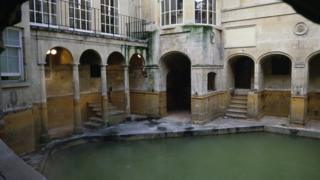 The Romans developed tourism in Britain, with the baths they built in the city of Bath remaining popular with tourists to this day

But they have one major thing in common – they have both called for people to take more domestic holidays.

Ms Morgan, who since her recent elevation to the House of Lords is now formally known as Baroness Morgan of Cotes, remains the government minister ultimately responsible for promoting British tourism.

And even before she took up the job in 2017 she was urging more Britons to consider taking so-called “staycations”.

Back in 2016, she went as far as driving a steam train to promote English Tourism Week. She said at the time: “Tourism isn’t just about people visiting our country from overseas, it is also about us visiting the wonderful attractions on our own doorstep.”

This would have been music to the ears of Roman writer Pliny the Younger (AD61-113). He once wrote: “Though we often take long journeys, and cross the seas to examine curiosities, we neglect them when they lie beneath our very eye.”

Pliny, who was also a lawyer and imperial magistrate, added that Romans should examine the “objects of interest in our city, and near to it, which we have not even heard of”.

As the UK is about to exit the European Union, Brexit appears to already be having an impact on the UK tourism sector. While more Britons are choosing to go on domestic holidays, at the same time visitor numbers from mainland Europe have fallen.

What can be done to regain travellers from Europe? Is the staycation market going to continue to boom? And are there any other parallels from ancient history?

Patricia Yates, director of official tourism agency Visit Britain, says that visitor numbers from Europe are down 3% over the past two years.

“The fall has been due to the uncertainly [over Brexit],” she says. “People [across Europe] have been concerned about a lot of practicalities – will the flights still go ahead? Can I still use my health card? Will my ID still be accepted?

“What we need to do is make sure we tell people in Europe, who are thinking of coming to Britain, that we are still open and we are still welcoming. And we are building up to a big campaign launch in that regard, very much people focused, to get across that sense of welcoming.”

Overall visitor numbers are still rising, however, thanks to travellers from the US and China. In total, Visit Britain predicts that the number of overseas visits to the UK will rise in 2020 to 39.7 million, the highest ever, and up 2.9% on 2019. However, these figures could take a hit if the coronavirus outbreak continues in China.

The number of domestic overnight holidays in Britain also rose 4% to a record 48.9 million from January to September 2019, compared with the same period a year earlier.

“Scotland is seeing a resurgence in the staycationer,” he says. “It is highly encouraging to see so many more Scots exploring what is right here on their doorstep.

“Uncertainty around Brexit, and currency fluctuations, have undoubtedly been contributing factors for holidaymakers who decided to travel closer to home.”

A survey last year from hotel chain Travelodge also found that Brexit was a big reason why more Britons were holidaying within the UK instead of going abroad. Its poll of 1,500 people found that 12% more were planning a domestic holiday than in 2018. And more than half said that Brexit was the reason.

Back in the time of ancient Rome they obviously didn’t have Brexit, or budget airlines, or the chance to enjoy long delays while waiting for Eurostar trains at Gare du Nord in Paris. But with the Romans building well-paved roads and way stations (like ancient motorway service stations) across their empire, organised long-distance travel became feasible for the curious and well-heeled. And a travel industry built up.

Some Roman commentators were unhappy with this though, and wanted people to stay within the borders of today’s Italy to prevent them being corrupted by foreign influence. Others were not impressed with people from other parts of the empire travelling to the Italian peninsula.

In his Third Satire, the first Century AD poet Juvenal constructed a xenophobic narrator named Umbricius who complains about the number of Greeks in Rome, and Syrian influence. Meanwhile in Tacitus’s Annals, the Roman historian said that politician Aulus Caecina Severus wanted to prohibit women from venturing beyond “the boundaries of Italy” for fear they would develop masculine traits.

Domestic tourism in Ancient Rome did in fact flourish, with the wealthy flocking every summer to their villas along the Bay of Naples. The poor also trekked to the seaside, but holed up in less salubrious tenement blocks. And the ancient city of Pompeii was a hotspot for travellers, unfortunate pun intended.

The Romans also helped to develop tourism in the UK, turning the healing springs at the town of Aquae Sulis (today’s Bath) into an attraction for travellers.

Cath Poucher, a UK tourism marketer, says that while Brexit has fuelled a rise in UK staycations, many Britons have “a genuine pride in their country, and a desire to explore it”.

Mike Bugsgang, a veteran travel industry expert, adds that Visit Britain will have to work hard if the UK is to regain the trust of European holidaymakers.

“Research has indicated that there is a perception in certain EU countries, notably Germany, that Britain is not as welcoming to overseas visitors as it was pre-Brexit,” he says.

“On the upside, Euro 2020 matches including the final in England this summer will certainly provide a welcome boost for inbound and domestic tourism.”

Yet Mr Bugsgang adds that not every Briton wants a staycation whatever complications Brexit brings. “As always, domestic tourism will be under pressure from the outbound holidays sector, with a recent survey by Travelzoo showing that despite Brexit, consumers are positive about their finances and want to travel to new destinations overseas.”

Additional reporting by Will Smale