What can restaurants do to help customers with allergies? 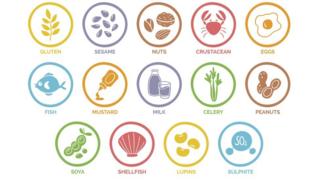 For people with food allergies, dining out can be stressful and in some cases, life-threatening or fatal.

This week the grieving family of Owen Carey, who died from anaphylactic shock after unwittingly eating Byron Burger’s buttermilk marinated chicken, demanded a change in the law to compel eateries to display full and clear allergen information on menus.

Under current laws for non pre-packed food, restaurants and other eateries must tell customers if any of their dishes contain the 14 most common allergens – either via a menu, chalkboard, information pack or verbally through staff members.

But critics argue the rules leave too much room for error and that the food industry should be doing more to keep customers with allergies safe.

So what can restaurants and eateries do to help? And do restaurant customers have a role as well?

Many restaurants and eateries already display allergen menus on their websites, including the 14 most common allergens, next to each dish.

And some restaurants’ online menus – such as Carluccio’s and Zizzi – allow customers to filter out foods by their allergy, which helps them make an informed choice about what they might eat.

For other restaurants, interactive allergen menu services like Menu Guide can help them cater to the estimated two million people in the UK with a diagnosed food allergy .

The online tool allows food retailers to customise their menus with the allergens in each dish, before they are added to the Menu Guide website.

Customers can view the menus 24/7 and filter out dishes according to their allergies or dietary needs.

Waiting staff can use Menu Guide on a tablet while taking customers’ orders to ensure they are providing accurate allergy and dietary information.

Restaurateur Andrei Lussmann, of Lussmanns Sustainable Fish & Grill, says his staff use Menu Guide because it reduces the risk of errors and allows them to spend more time serving the customer rather than worrying about allergens.

“We make sure that that the ingredients in the menu are correct and have been updated by someone who sits at a desk, rather than a busy manager in a restaurant,” he says.

‘Being open about ingredients’

Whether or not interactive menus are available, campaigners say all food outlets need to be totally open about the ingredients they use

Nathalie Newman, 38, started her Intolerant Gourmand blog after her son Callum, seven, was diagnosed with 28 allergies, eight of which are life-threatening.

She now advises chefs and restaurants on ensuring their menus are allergy-compliant.

Full declaration of ingredients is the best way forward, she says.

“No one wants to know how restaurants make their secret recipes.

“They can stay secret, but the only thing that the allergy community are desperate to know is what all the ingredients in the dishes are – because it keeps them safe.”

What happens when it goes wrong

Last year, Ruth Holroyd, 46, was looking forward to enjoying a Christmas meal with work colleagues at a local pub restaurant.

But instead of spending the night celebrating, she was rushed to intensive care after unwittingly eating a meal containing dairy – to which she is severely allergic.

This was despite her following her usual “military precision” of notifying the restaurant online, by phone and in person of her severe nut and dairy allergies.

She says: “I was with my colleagues, who like me, told them that I was really allergic and that there couldn’t be any milk or nuts in my food.”

After initially claiming they didn’t have her online order, the restaurant “changed their tune,” she says.

“They told me the chef had done me a special dish and it came out, and I thought it looked like it had cheese in it.

“I sent it back and told the waitress it was wrong, that I thought it might have cheese in it, and I was told that it did not, that it was special for me.”

“I ate some of it and I had the worst allergic reaction I’ve ever had.”

Ms Holroyd, who is from Buckinghamshire and has recently launched a podcast called Allergy Today, later suffered panic attacks and had to have counselling after she was left “terrified” to dine out.

The local council are investigating the pub restaurant, and Ms Holroyd wants to see them prosecuted.

She says: “It’s heartbreaking, when these things come to court and the only time restaurants are prosecuted is when they kill someone and they don’t seem to get into trouble when they make people really ill.”

There is general agreement that the restaurant industry needs to up its game on catering for customers who may have food allergies.

Michelle Berriedale-Johnson, of the Free From Eating Out awards, says awareness of allergens and their implications can be “incredibly patchy” and that written information, rigorous training and clear systems are vital.

“If you have good systems in place in your kitchens to ensure all the allergen-free products can be kept separate from the allergen-filled products, and if you then design your menu well to make it clear to your customers that there may be a product that could be dangerous to them.”

The Nando’s restaurant chain already ensures information about customers are communicated clearly between diners, staff and the kitchen.

Customers who may have allergies are encouraged to look through a food allergy and information book with a manager before ordering.

The manager then oversees the order to monitor its preparation in the kitchen and delivery of the food.

Others, like Bella Italia, have a step-by-step service policy they use for customers with allergies, including highlighting their separate dairy-free and allergen menus, and marking prepared meals with a flag or symbol to reassure customers.

Customers can also help restaurants improve their allergy policies – by being honest about their food choices.

Mr Lussmann said some customers “cried wolf” by falsely claiming to have allergies or intolerances when they were in fact stating a food preference.

And Ruth Holroyd says people who falsely claim to have allergies “infuriates her” as it risks chefs doubting genuine sufferers.