What happens to all the old wind turbines?

February 8, 2020 by Joshua Marshall No Comments 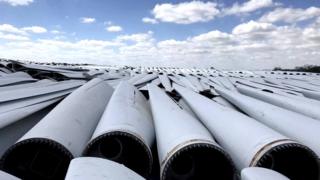 Welcome to the wind turbine graveyard. It stretches a hundred metres from a bend in the North Platte River in Casper, Wyoming.

Between last September and this March, it will become the final resting place for 1,000 fibreglass turbine blades.

These blades, which have reached the end of their 25-year working lives, come from three wind farms in the north-western US state. Each is about 90m (300ft) long, and will be cut into three, then the pieces will be stacked and buried.

Turbines from the first great 1990s wave of wind power are reaching the end of their life expectancy today. About two gigawatts worth of turbines will be refitted in 2019 and 2020. And disposing of them in an environmentally-friendly way is a growing problem.

Many unwanted blades are just buried

Burying them doesn’t sound very green. Can they not be recycled?

Wind power goes as far back at least as 9th Century BC Persia, where sails were used to grind grain and draw up water on the windy Sistan plains.

Instead of using cloth to catch the wind like Prof Blyth and the ancient Iranians, today’s turbine blades are built from composite materials – older blades from glass fibre, newer ones from carbon fibre.

Such composite materials might be light and strong, but they are also extremely hard to recycle.

That doesn’t mean they have to go into landfill, according to Don Lilly, chief executive of Global Fiberglass Solutions in Bellevue, Washington.

Mr Lilly has been transforming fibreglass composites into small pellets he calls EcoPoly.

The pellets can then be turned into injectable plastics, or highly waterproof boards that can be used in construction, he says.

Mr Lilly has received interest from “several manufacturers” for his pellets.

He’s also developed a programme to track blades throughout their life cycle, and make it easier to recycle them at the end.

If we “holistically think about the end of life, there are simple choices we could make now that could make fibreglass in the blade easier to recycle,” says Richard Cochrane, professor of renewable energy at Exeter University.

A second avenue for recycling turbine blades is called pyrolysis.

After first chopping up the blades, pyrolysis breaks up the composite fibres in ovens with an inert atmosphere, at about 450-700C.

The process recovers fibres other industries can reuse for glues, paints, and concrete.

Other products include syngas (synthesis gas) that can be used in combustion engines. And char (charcoal) which can be used as a fertiliser.

The problem is significant amounts of energy are needed to activate the pyrolysis, which might limit its environmental usefulness. It has mainly been done at a laboratory scale. Germany’s subsidiary of the French recycling group Veolia is researching the technology.

In Rotterdam unwanted blades have been put to a different use. The Dutch city boasts a 1,200sq m children’s playground called Wikado, with a slide tower, tunnels, ramps, and slides all made from five discarded wind turbine blades.

Decommissioned blades have also been turned into another playground and outdoor seats in the Dutch city of Terneuzen, two bus stops in Almere, a seat beside Rotterdam’s famous Erasmusbrug bridge.

Césare Peeren, an architect from Rotterdam’s Superuse Studios is currently waiting for planning permission to turn two 55m blades into a bridge in Denmark’s city of Ålborg, he says.

Meanwhile new rotors are only getting bigger.

“Twenty years ago, my colleagues and I used to ask ourselves what is the most powerful offshore wind turbine that we could imagine,” says Vincent Schellings, who works for General Electric in the Dutch city of Enschede.

“We couldn’t picture anything much more powerful than a three megawatt (MW) output, but even that seemed a challenge,” he says.

“So we are going to see much bigger turbines offshore in this decade, and the reason is size matters,” says Rolf Kragelund, Danish-based director of offshore wind for the energy research firm Wood Mackenzie.

Bigger onshore turbines can access faster wind speeds, higher in the sky. They can produce more energy, meaning you need fewer of them, which saves money on transport, installation and servicing.

Siemens Gamesa says 20 of its new 10MW turbines, announced last year with 94m blades, could power Liverpool, with a population of half a million.

But large turbines bring along their own challenges, including what to do with them when they are no longer needed.

Longer blades can make for bigger recycling headaches, too.

The composite fibreglass in blades is “the most difficult, and the most expensive part” of turbines to recycle, Mr Kragelund says. And there’s more of it.

Recycling has made more progress so far in the onshore than offshore industry, which is newer, he adds.

But while “there is work being done to find ways to recycle materials from old turbines,” it “would be nice to see more design input now, so that’s easier in the future,” says Prof Cochrane.