Who are the family buying Thomas Cook shops? 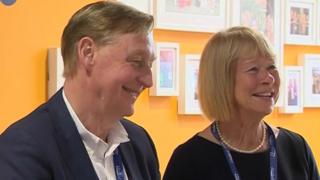 John Hays, founder of the travel firm that is rescuing Thomas Cook’s High Street shops, knows a thing or two about survival.

Soon after setting up Hays Travel in the back of his Mum’s childrenswear shop in 1980, a rival firm appeared.

Mr Hays was forced to offer free travel insurance to win customers – a move that nearly sank the nascent firm.

The takeover by the Sunderland-based travel company could potentially save 2,500 jobs after Thomas Cook went bust two weeks ago.

It will potentially more than double Hays Travel’s employee-count, which currently stands at 1,900.

The deal is, without doubt, the biggest in the history of Hays Travel, which began in the Country Durham town of Seaham.

Mr Hays started the business after studying maths at the University of Oxford and completing an MBA.

It has strong family connections. His mother, Margaret, was a director until 1998 and other family members have been directors at the travel agency over the years.

His wife, Irene, chairs the Sunderland-based business and owns the controlling stake of 50.1%

The free insurance offer that nearly sank Hays Travel in its early years ended up propelling its growth. enabling it to open 10 stores by 1990.

It has expanded in the intervening years and now has 190 of its own stores – before taking on the 555 from Thomas Cook.

Mr Hays, who is managing director, acknowledges the deal will be a challenge.

“It’s going to be a tough ask but it’s very doable,” he says.

He said he could succeed with the shops where Thomas Cook failed because Hays is an independent agent offering holidays from all operators.

Although Hays has a big internet and social media profile, he said there was still a demand for personal service in shops.

“We are pretty big already, and have a lot of buying power so our prices are competitive,” he said.

“We didn’t embark on this without giving it very serious thought.”

Mr Hays said: “We do have the management and the capacity to do this. It’s been endorsed by the Civil Aviation Authority. They’ve approved the plans that we’ve got.”

Commenting on whether the company will retain all 555 Thomas Cook shops and its 2,500 staff, Mrs Hays said: “At this point in time we have no plans to close any of those and what we want to do is go into those shops and look at the opportunity. Categorically we’re not going to go in and say ‘this is absolutely a waste of time’.”

“Obviously we are a commercial organisation, we will take a view. But as of today we have no plans to do that at all.”

The family-run company prides itself on how it looks after its staff.

They received a bonus last year after the firm’s total sales hit £1bn and hundreds attended the firm’s annual summer party held in the garden at Mr and Mrs Hays’ home.

As the rescue of Thomas Cook’s High Street stores was announced, Mrs Hays said the affect of the company’s collapse on its employees was “a tragedy”.

“Thomas Cook was a much-loved brand and a pillar of the UK and the global travel industry. We will build on the good things Thomas Cook had – not least its people – and that will put us in even better stead for the future.”

“We’ve said many time before that travel in general in the UK is a relatively small industry and it’s a family.”