Why are people shopping online late at night? 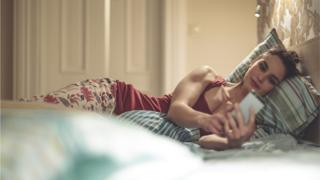 More consumers seem to be shopping online late at night and in the early hours of the morning, say retailers.

New data from the John Lewis Partnership Card shows that one in 15 purchases are now made between the hours of midnight and 06:00.

The research shows that the number of purchases made in this period rose by 23% in 2018, compared with 2017.

“It’s partly to do with the more recent generations of mobile phones, and the retailers are becoming much more sophisticated,” he says.

“They’ve realised that if you go to the website and you don’t buy, they have to spend money trying to get you back on to the website, so they’re investing a lot on the websites and software.”

Online-only fast fashion retailer I Saw It First says that it too has seen a spike in nocturnal shopping visits to its website.

The retailer, which was the main sponsor for ITV reality show Love Island for summer 2019, told the BBC that peak customer traffic occurs at 21:00 and ends at about 01:00.

During this period, customers aged 18-24 are most active on the website, while dresses and tops are the most popular items.

But why do people feel the need to do their shopping so late at night?

‘It’s the only time’

Romana Kuchai, a doctor based in London, says that bedtime is the only period in the day when she has the time to go online to do her shopping, whether it is for essential or spur-of-the-moment purchases.

And she is not alone. Many women told the BBC that they too like to shop for clothes and even get their grocery shopping orders done late at night.

“My brain is buzzing at that time of day, so I’m often buying house decor, clothes, food – anything my brain has in its to-do list,” Hampshire-based marketing director Kerri Watts told the BBC.

This ties in with the John Lewis research, which found that night-time spending is predominantly done by women. However, men are likely to spend more late at night than women do.

The top five most popular items being bought on John Lewis in the early hours of the morning are:

Luke, 27, told the BBC that he and his partner work 45-50 hour weeks, and they use online shopping as a way to get things done so that they can spend more time on their relationship at the weekend.

However, Mr Field says that purchases made online at night are actually part of a “shopping journey” that begins much earlier in the day.

Retailers say that many purchases are not made impulsively. Usually the consumer has looked at the item at least once previously, perhaps on a desktop computer, before later deciding to take the plunge and buy the item on a mobile device.

This ties in with the experience of electrocardiogram technician Taia Johnstone. She told the BBC: “I sit there and save items in my basket and then online shop late at night, not sure why, but the most horrendous outfits suddenly look wearable around 11:47pm on the model.”

According to Mr Field, this nocturnal shopping phenomenon has grown over the last two years, and shoppers are not just buying items at unusual times of the day, but also initiating returns at different times as well.

Now, retailers are having to consider whether they need to extend the hours that they employ staff, especially as the online shopping market becomes even more competitive, he adds.

Plus the costs of operating an online ecommerce website are now about equal to the costs of running a bricks-and-mortar shop, research from retail consultancy AlixPartners has shown.

“Retailers are trying to understand whether they will need to have some kind of night shift at their contact centres, so there are at least a handful of people available to help with orders or answer questions,” he says.