‘Why economists get things wrong’ 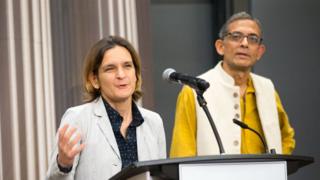 “Economists are always saying on the one hand, but then on the other hand,” says Prof Esther Duflo, pictured with her husband Abhijit Banerjee

Economists have had a hard time in recent years, with Conservative politician Michael Gove famously saying that people were tired of “experts” during the Brexit campaign, branding them “distant”, “unaccountable” and “elitist”.

Today, trust in economists is barely above that of politicians.

“Economists are always saying on the one hand – but then on the other hand,” says Esther Duflo, professor of poverty alleviation and development economics at the Massachusetts Institute of Technology (MIT). “That’s why people are always looking for a one-armed economist,” she jokes, quoting former US President Harry Truman’s reputed comment.

But Prof Duflo, who recently won the Nobel Prize in economics alongside her MIT colleague and husband Prof Abhijit Banerjee, and Harvard’s Prof Michael Kremer, has certainly come off the fence in a new book that hits out at some of economists’ prized myths.

In Good Economics for Hard Times, Profs Duflo and Banerjee grapple with how to deal with some of the 21st Century’s biggest challenges, and argue that economists are more important than ever in today’s polarised world.

Conventional economic theory doesn’t focus on what people actually care about, they say. Money matters, but in reality people are more concerned about “purpose, belonging and dignity” than in making a few extra dollars – even when times are tough.

This is a “huge blind spot in economics”, says Prof Duflo, speaking to the BBC as economists often assume people will respond very strongly to financial incentives.

Conventional economics maintains that “if you are in a job working in a clothes factory in some small town in the US, and that job vanishes because of competition from China, you will pack up and go miles away and take a job selling new clothes in a shop,” she says.

And it is not just economists. A separate study of 10,000 Americans by the husband and wife team showed 62% of respondents think the jobless should move to find work – even if the job on offer is 200 miles away.

Jobless Americans queue to speak with prospective employers at a careers fair, but people are less willing to move than many economists believe

Yet when asked if they themselves would move for a job, only 52% said yes. Of those who were unemployed, only a third said they were willing to move. In reality many people don’t move even after a factory has closed down.

Money does play a role; moving house may be too costly, or any pay rise might be eroded by higher living costs, says Prof Duflo. And US population mobility is certainly decreasing. In 1985, census figures showed nearly 20% of Americans had moved house in the previous 12 months, but by 2018, this figure had more than halved.

But there are more compelling reasons not to move, she says. A New York Federal Reserve study shows around half of Americans remain attached to where they grew up. This “rooted” group are disproportionately white, older, married and live in rural areas.

Around half of Americans remain attached to where they grew up

“When bad news arrives in the form of greater competition from outside, instead of embracing it and moving resources to their best possible use, there is a tendency to hunker down and hope the problem will go away on its own,” write Profs Duflo and Banerjee.

“Workers are laid off, retiring workers are not replaced, and wages start to drift down. Business owners take a big hit on their profits, loans get renegotiated, all in order to preserve as much as possible of the status quo.”

The idea that more trade is good is “deeply engrained” in many economists, says Prof Duflo. For example, when the US imposed thousands of tariffs on goods in the 1930s, over a thousand economists wrote to President Hoover asking him to veto the bill. Even today, the threat of tariffs sends wobbles through stock markets.

Yet Prof Duflo cites research by MIT academics Arnaud Costinot and Andrés Rodríguez-Clare that shows that the gains to the US from trade are about 2.5% of gross domestic product (GDP).

“This is really not a lot,” she says. “The truth is, if the US were to go back to complete autarky [not trading with anybody] it would be poorer. But not that much poorer.”

Economists debate how beneficial trade is to the US economy

But not everyone agrees. Douglas Irwin, a trade historian and professor of economics at Dartmouth College, says the gains to the US from trade in Costinot’s research, range from 1.8-10.3% of GDP.

“Something like 10% is nothing trivial,” says Prof Irwin. “I would say historical experience has shown that trade reforms in developing countries have improved their economic performance and resulted in significant poverty reduction.”

Prof Duflo says while countries like China have benefited massively from trade – the experience of other countries has been mixed.

China has built a reputation for being able to make things cheaply, quickly, and reliably – making it harder for smaller countries like Ethiopia or Egypt to compete – even as Chinese living standards keep rising.

Labour leader Jeremy Corbyn has pledged to introduce a “fairer” tax system if he becomes the next UK prime minister. Labour has vowed to make the rich pay more tax, and some party members have even suggested there should be no billionaires in this country.

Prof Duflo says the evidence suggests that rich people don’t suddenly stop working because of higher taxes, but adds that just taxing the wealthy more won’t necessarily close the gap between the rich and poor – or generate any extra revenue.

“For example, if taxes on people making more than £500,000 a year are very high then companies will not feel the need to pay them those very high wages in the first place – because they would just go to the Treasury’s coffers anyway.”

But slashing taxes isn’t the answer either. In their book, Profs Duflo and Banerjee cite a US example when Republican leaders in Kansas passed deep tax cuts in 2012 in the hope these would spur the economy. The opposite happened. The state was left without enough money to pay for public services, and officials were forced to cut the school week to just four days.

Prof Duflo says higher tax rates have to be matched by better services or targeted help for those who need it most. “Policymakers need to look at policies that will help the person who has lost their job in a factory because they got replaced by robots or because the the item is now made in China.

“Unless we have a successful answer to this question, then just taxing the rich is not going to help because it’s not going to make those people less angry.”

Listen to an extended interview with Esther Duflo on Business Daily for the BBC World Service.